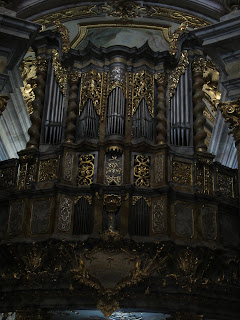 On Friday May 27, 2011, we docked in Regensburg (pronounced “Ragensburg”), Germany, along the Main River. This day was interesting, and also eventful in the life of our cruise.

As we made our way down the Rhine River a few days before, we knew that low river levels might cause delays. We had spectacular weather up through May 26, the day we arrived in Regensburg. However, our cruise director warned us that water levels were low in this area of the Main, and we expected that things might change.

I started the day joining an optional tour to the Danube Gorge and Weltenburg Abbey, about 30 minutes from where the boat stopped to let us off. The boat then went on down the river a short way and docked a few hundred feet from the center of the old part of town. Brian slept in this morning.

Our trip to the Abbey took us through beautiful countryside, and along a part of the Danube where we visited a small abbey located on the edge of the river. Historically, this part of the river has flooded, and we could see height marks along the few structures, the stone mountainside, and the abbey, as we took a short walk up the road from our bus. Some of these buildings were flooded well past the level of their doors and first floors, as recently as 1999. On our walk to the Abbey, we passed a monument in commemoration of American soldiers who drowned in the river when their pulley used for transporting supplies from one side of the river to the other broke. Although the residents in the area were able to save most of the soldiers, three perished, and this monument honors them. 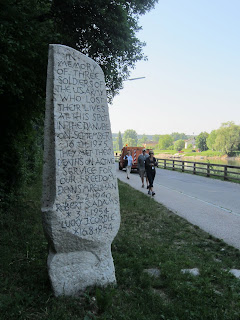 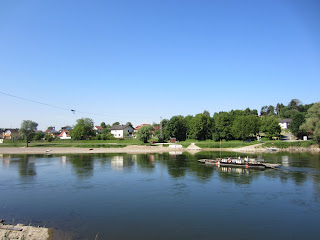 This abbey is known for its brewery. The dozen or so Benedictine monks that still live there run the brewery and also raise pigs (no where within our sight!) to eat the leftover hops from the beer. The small church was beautiful inside, with frescoes, carved statuary, gold leaf decorations, and a massive altar depicting a horseman and saints. 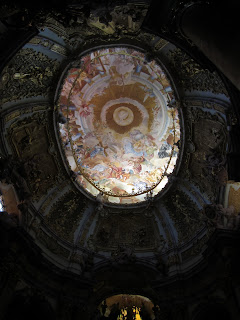 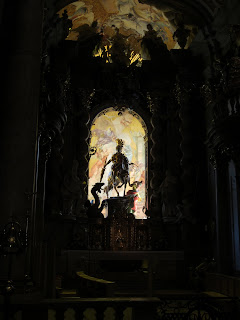 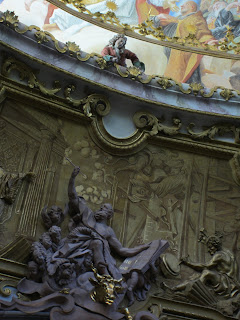 From there we walked along the river a few hundred meters and caught a ferry boat which traveled down the Danube Gorge. This area was beautiful, but because the water was relatively low, probably not as impressive as it might have been. Nevertheless, the high mountains bordering this narrow portion of the river were impressive, and the weather was warm and perfect for a 25 minute trip back to where our bus was waiting. 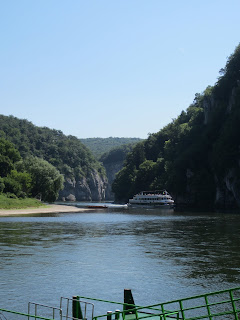 We returned to the ship for lunch, which today was on the deck – a grill of traditional Bavarian sausages, cabbage salad, and, of course, ice cream for dessert. The weather was perfect for lunch on the deck.

Before leaving for our afternoon city walk, we were all called into the large lounge, were our cruise director Andreijz had an important announcement. The water level between Regensburg and our next stop, on the Danube, was too low for our ship to pass. We had been ordered not to leave the town until at least 8 a.m. the next morning. We all prayed for rain, because if the ship could not get past the next stretch, we would have to continue our trip by bus.

We all collected our radio receivers, and left the ship to go on a walking tour of Regensburg. Many of the buildings in this historic city are registered as historic sites, and the entirety of the Old City has been declared a UNESCO World Heritage Site. By having this label, these historic sites must remain true to their original character and cannot be changed, only maintained.

This city is in the heart of Bavaria, and was, until 1992 when the Rhine-Main-Danube Canal was opened to connect the three rivers, the terminus for large commercial ships on the Danube. The old city is charming, and we walked along the streets enjoying the historic buildings that have been maintained to their original look. 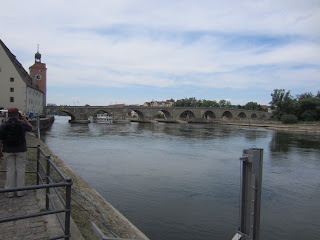 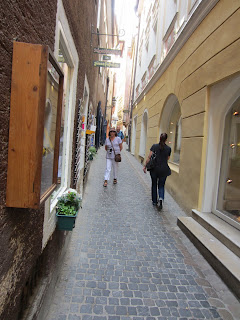 At the end of the guided walk, Brian and I continued to walk along the little streets, and then stopped at the old sausage house and ate our “complimentary” sausages, kraut and beer. We returned to the boat, did not eat dinner, and sat in the back lounge with Deb and Doug and other passengers speculating on what might happen the next day if it did not rain. Although clouds rolled in and we had a light rain, that would not have been enough to get us out of the town.

We went to sleep in the evening hoping that the next few days would not cause havoc with our leisurely vacation.