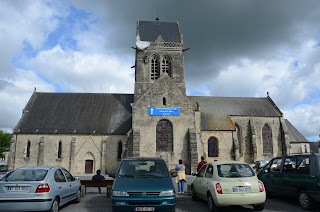 We spent Sunday and Monday visiting the beaches of the D-Day invasions and nearby museums. Our trip began in the village of Saint Mère Église. This little town stood right in the middle of the landing zone of the American paratroopers of the 82nd and 101st Airborne Divisions.

On June 6, 1944, during the early landings, paratroopers missed their marks and landed right in the middle of town. Unfortunately, a local home had caught fire that night and the city people, along with German soldiers, were outside battling the fire as the paratroopers began raining down in the center of the small town. One paratrooper’s parachute was stuck on a spire of the Cathedral. Sgt. John Steele hung from the church by the ropes of his parachute for a few hours, pretending to be dead, while watching his fellow soldiers being shot down by the German soldiers. He was shot in the foot, briefly captured by and later escaped from the Germans. He eventually joined up with his American soldiers a few days later. As a result of the constant ringing bells of the cathedral, Sgt. Steele lost his hearing. His experience was chronicled in the movie The Longest Day. The city has placed a monument to Steele on the church steeple, reflecting a white parachute and “dummy” body handing from the roof of the church. 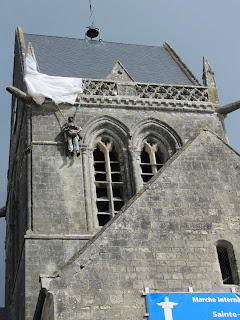 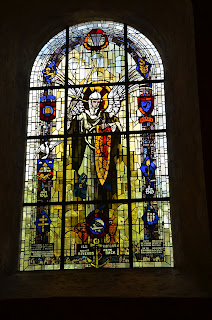 After two days of heavy fighting by the few soldiers remaining alive, reinforcements were able to make it up the cliffs of the nearby beaches and into down, liberating the town from the Germans.

Across the street from the Cathedral, and on the same land where the burning house once stood sits the Airborne Museum. It contains one of the original gliders used to bring in the paratroopers, and an A-47 plane that was used to pull the gliders across the English Channel. Many soldiers and pilots were killed during that early mission, with gliders crashing into fields flooded with water by German soldiers, into barns and power stations, often off target. We enjoyed visiting this historic site of the June 6, 1944 D-Day landings, and it really brought home how dramatic the events must have been for the paratroopers who were dropped in the dead of night into fields helter skelter. The museum contained examples of rations that soldiers carried during these times. 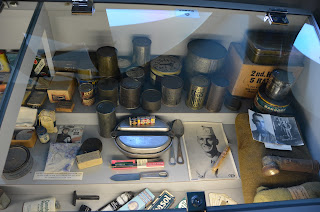 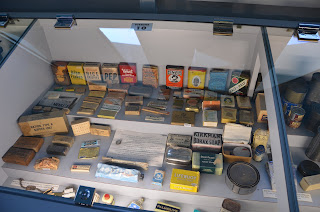