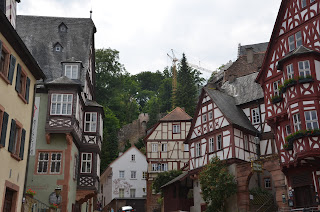 Next Stop: Miltenburg and Wurzburg

Over the next two days, Sunday and Monday (May 22 and May 23) we continued our leisurely cruise down the Rhine, switching over to the Main River, and stopping at the little town of Miltenburg, and then Wurzburg. Our routine has usually been a ½ day tour and walking around the town, and then half of day cruising. But, this will end on Wednesday when we reach Nuremburg. At that point, in addition to our morning tours, we will be taking some “optional” side trips.

The nice thing about sailing along the river is that you always see people, walkers, bikers, children playing, fishermen, campers (hundreds of them!), and town life. Being on the river is so much nicer than an ocean cruise! The shores are lush with green trees, heavy with pollen (and causing a LOT OF HAY FEVER!). The townspeople are often standing at the shore, waving at us as we slowly pass by. I think part of the reason is that this is a new, and slightly larger, ship and people are curious. As we sit in the dining room on the lower level, we often see castles on the hills, people on the shores – it is really a relaxing and beautiful site. 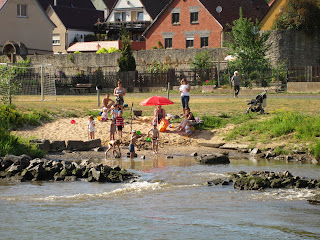 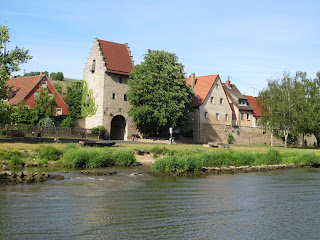 Miltenburg, in Bavaria, was not particularly notable other than being a town dating back to the 16th Century. The guide assigned to us was not very interesting, and because it was Sunday the little shops were closed. The town was notable in WWII when the Germans decided to bomb their own bridge in that town to prevent General Patton from advancing across the river into Miltenburg, and that area of Germany. Unfortunately for the Germans, the next day Patton nevertheless had his troops build pontoons, and they crossed the river, eventually defeating the Germans in that area. The fountain in the market square is several hundred years old. Because the ruler of the city at that time was unable to secure money from the larger region to fund his fountain, he left a "mark" on the fountain statue that has sent a message in perpetuity of what he thought of those who denied him the funds! 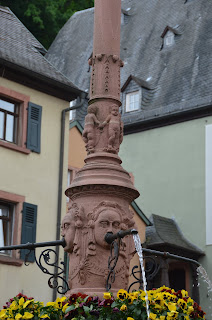 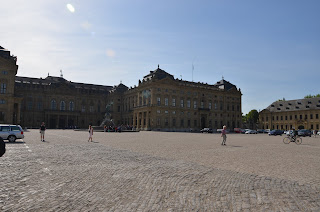 We reached Wurzburg, in Franconia, in the early morning, and greeted our next set of guides around 8:30 a.m. Our cruise director Andrei delivered his typical announcement: “Dear Ladies and Gentlemen, please collect a radio receiver and shore pass, bring your earpiece, and join your tour guides for your daily program.” We were bussed to the center of town from our ship, where we toured a palace called The Residence. This was built by the local Bishop/Prince with frescoes by the Venetian painter Tiepolo.

As we walked up the massive staircase to see the entry ceiling fresco, I was SHOCKED to see one of its panels depicting portions of the ARMENIAN ALPHABET! The fresco was designed to show the then-recognized four continents: Europe, Asia, Africa and America. The panel showing the Armenian Alphabet was put their by Tiepolo to demonstrate that alphabets and letters were originally created in Asia in the early centuries. Armenian Saints Sahag and Mesrop created Armenian Alphabet in the mid-5th Century. Notably, when we visited Saniurfa in Turkey in 2009, we visited the remains of the castle, where some believe St. Sahag stayed while working on the alphabet.

Large portions of the Wurzburg palace, which suffered extensive fire damage during WWII, have been restored to its original beauty, with ornate plaster decorative pieces, reverse-painted glass and mirror wall coverings, chandeliers, and some tapestries. Most of the original art and furniture was removed from the Palace before the bombing because the towns people expected that the Allied Forces would be coming to that area. Some of the Palace was constructed of wood (floors and roofs) and those burned when the city was fire-bombed. 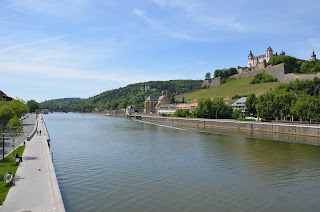 The remainder of our visit consisted of a stroll along the river through the town back to our ship. We saw a palace on the opposite side of the river as we briefly crossed over the old bridge. 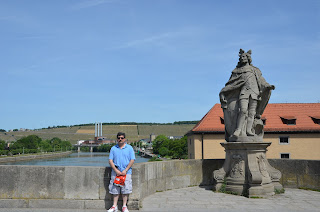 We had lunch, and then returned to our rooms. Brian took his usual nap (3 times a day where possible) (*Brian—they would be shorter if the AUTHOR didn’t snore all night!) and then we then continued our cruise down the Main river, towards the Danube. One lock after another took us upriver – the locks can sometimes take thirty minutes or more, by the time we slowly enter the narrow locks, hook up with ropes, watch the rear gate close, and the front gate slowly allow water into the lock to raise the level of our ship to the next portion of the river. 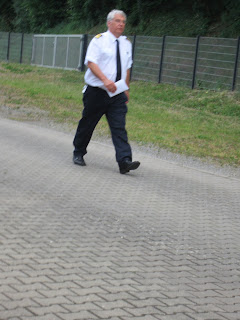 Our Captain - as we reached the top of a lock
Posted by Lexizmom at 8:56 AM