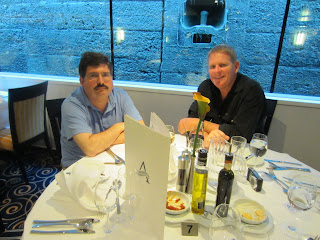 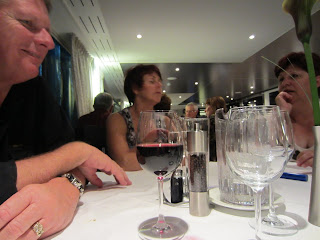 As we cruised the Rhine, particularly in the evenings during dinner, we would see people sitting alongside the banks of the river, fishing, having a glass of wine, or riding along the bike paths that run parallel to the river. Occasionally a small village would peek out from among the tall pine trees lining the river. Often we would see a family of geese, or swans, in the water along the water’s edge. It was so peaceful.

Unfortunately, because most of the bridges we had to pass under were relatively low, except for the short stretch of the Rhine gorge on that 2nd day of cruising, we have not been permitted to go up to the sun deck as we sailed along the river. All of the deck chairs are stored, the sunshades and railings along the edges lowered flat, and often the captain’s cubicle is lowered flat. That is one downside of being on one of the largest of the river cruise ships now sailing. 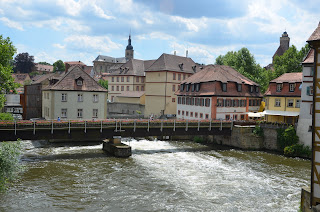 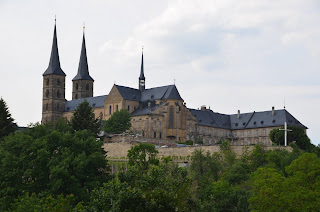 Our visit to Bamburg started with a walking tour, as we do each day, with a local guide. We break into groups with colored radio receivers. Our guides also have a receiver and microphone, and this way we can wander along as they talk about the history and architecture of their city. The tour guides in each city are from the local tourist office, and most of them have been very pleasant and knowledgeable.

We walked through the winding streets lined with renaissance and baroque buildings, now occupied by little shops. We visited the large prince-bishop's residence, with its rose garden that is not quite ready to bloom. This town is known for its very dark beer, which we passed on. 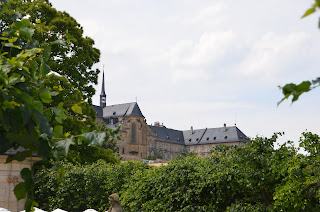 Typically, after we return from our 80 minute walking tour, which is either in the morning or afternoon depending on when we get to the port, we then have a short time for rest before we have our lunch (which seems to be not long after we have had breakfast!) or afternoon coffee and cake (not long after lunch). Often, we will go to the back lounge which has a very efficient espresso machine, as well as fresh fruit, small sugar cookies (not home made) and fruit juices. A large screen TV usually shows the nautical map that we are following, or occasionally a local soccer or sports game if we have reception.

Next stop: Nuremberg - worth it's own page! 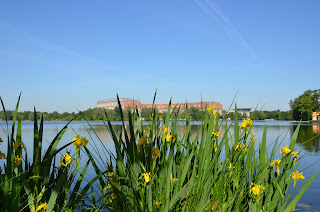