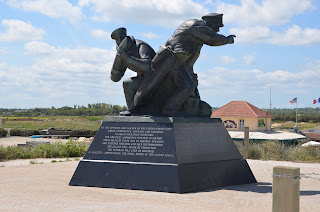 Our next stop was Utah Beach, which we reached by driving along country roads a few miles from St. Mère Église. This beach was the western most of the Allied landing beaches during the D-Day invasion of Normandy as part of Operation Overlord. 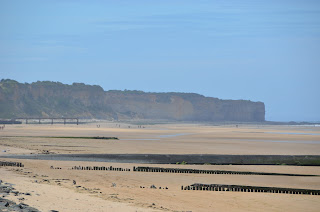 Here, although considerably off course, the US 4th Infantry Division landed on the beach with little resistance from the Germans, who were not prepared for this nighttime invasion of France. We walked along the beach, felt the silicone-like sand under our feet, and enjoyed the quiet sounds of the ocean and birds, imagining what it must have been like for those first-line soldiers as they marched off their very cramped boats. Scattered across the sand were remnants of what was called “Rommel’s Asparagus.” These were posts that were placed all through the water, with mines attached to the top, intended by the German General Rommel to impede anyone attempting to land on the beaches. We could see rows of these posts still standing in the water scattered both far and near to the shore. Some of the posts remained on the sand, rotted, but clearly visible. It was a very strong reminder of what the Allied soldiers must have faced as they landed in waves of thousands running toward the shore trying to survive the barrage of the shells from German gunfire. 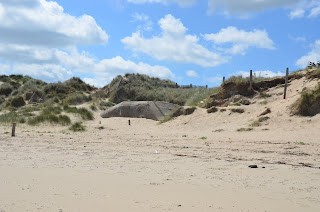 We climbed from the beach up to the concrete base of what was once a heavy gun installation. You could still see the bolts on the top that held heavy machinery placed there by the Germans in anticipation of an eventual invasion of France. Quite notably, the Germans did not expect the Allied forces to invade France at this stretch of beach or those of Omaha, Gold, and Juno. Instead, their intelligence sources told them that the Allied forces were planning to invade, under the command of General George C. Patton, at Calais, considerably further northeast from these beaches. Because of this poor intelligence on the Germans’ part, they gathered forces and heavy equipment in that area, and made it possible, unwittingly, for the Allied forces to win the first battles of D-Day and the few days later because of the weak line of defense from the Germans.

Brigadier General Theodore Roosevelt, Jr., oldest son of former president Teddy Roosevelt, was one of the first men off the boats at Utah Beach, and the only general and oldest soldier to land with the initial seaborne assault, at age 56. Roosevelt successfully modified the attack plan on the beach, and achieved the original mission objective. Roosevelt died 5 weeks later, on July 12, 1944, of a heart attack, a veteran soldier and public servant. He posthumously received the Medal of Honor in September 1944. He and his brother, Quentin, who was killed in France in WWI, are both buried in the American cemetery in Normandy. 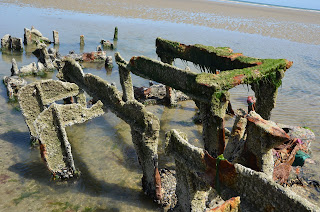 Omaha Beach, a 5-mile stretch of beach, was the main site of landings of the Allied forces on June 6, 1944. This beach had sentimental value to us because our relative, “Uncle” John Poochigian, landed here two days after D-Day and fought with the American troops to liberate France.

The beach was incredibly beautiful – peaceful, long stretches of hard sand, and scattered with unusual seashells. A feeling of reverence seems to pervade the air, as reality strikes that this area saw thousands of men die in the battle that they had come to fight.

Here we saw the remains of heavy iron posts that were placed in the sea and on the shore in a tent like design. These barriers were designed by the Germans to stop boats from landing on the shores of this long stretch of beach. Their remnants were hauntingly eerie – giving one the sense of what those soldiers must have saw and felt as they rushed the beach, again valiantly attempting to make it to the base of the high cliffs while avoiding the heavy gunfire from above. Additionally, the Germans had laid barbed wire along the beach, again to deter a landing. However, because of the intelligence sources advising that the invasion would occur at Calais, Hitler and his advisors refused Rommel’s request for millions of feet of additional barbed wire, and additional mines, discrediting Rommel’s strong concern that an invasion of Normandy was imminent. The story goes that Hitler was taking a nap at the time Rommel requested permission to strengthen the lines at Normandy. Hitler’s next in command refused to wake him up. As a result, Rommel’s request was never granted, and the rest is history.

We could also see the remnants of one of the harbors constructed by the Allieds after the landings. This, like the one at Gold Beach in Arromanches (see next blog) was designed to bring in heavy equipment and supplies from the ships waiting at sea. The one at Omaha was destroyed in an unseasonably horrific storm twelve days after it was constructed.

Along the beach, one can also see the well preserved remains of a bunker sitting just below the cliffs. Looking at the shoreline and the many cliffs along these beaches, I was amazed at how our soldiers managed to climb up, and break through, those amazing physical barriers to forge eastward and eventually liberate Normandy. 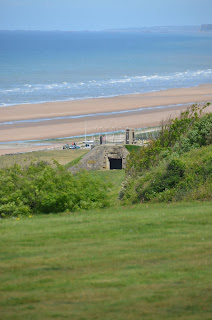 The American Cemetery at Omaha Beach

At the end of Sunday, we visited the American Cemetery above and overlooking Omaha Beach, shortly before the cemetery closed. The sun did not set until well after 9 p.m. in this area, so we had a beautiful view of the ocean as we walked along the top of the beach.

More than 9500 American soldiers are buried at the cemetery above the beaches where the first landings took place. We wandered among the crosses and Stars of David, reading names, home towns, and dates of death. Some of those buried there were brought from temporary cemeteries that the soldiers had created to bury the dead until something more permanent could be created. We learned that families were given the option to bring their loved ones home, or have them buried in the cemetery along with their fellow soldiers, including more than 1500 that were not identified. Approximately 60% of those families chose to bring their dead home. The cemetery was a fitting tribute to those who fought, both in the pre-June 6 bombing raids, and during the landings. 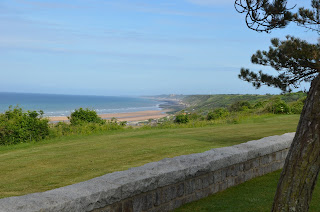 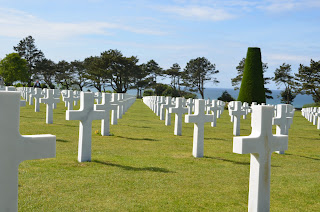