Caen, Arromanches, and a WILD ride to CDG

On Monday, Brian and I went on our own and visited the Memorial Museum of Peace in Caen. Caen was mostly destroyed in the early days after the D-Day invasions, with the Germans fighting fiercely to defend their position in that city. The museum is a chronological history of wars in the world from WWI through current day terrorism. It was a beautiful museum with videos strategically scattered throughout the many exhibits. The exhibits depicting WWII, including the construction and eventual destruction of the Berlin Wall, were very compelling. One of the most interesting original video, narrated in current times, was of the Nuremburg trials, where each of the Nazi defendants were identified by a brief description of their position with Hitler’s command, and their ultimate destiny. 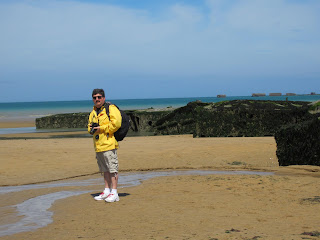 Brian on the Beach at Arromanches

From Caen, we drove in the afternoon to the beach of Arromanches. Here, the Allied Forces built harbors in the days immediately following June 6, 1944. The harbors were constructed of old barges that were sunk, and “roadways” were constructed above that extended off the beach into the ocean to the supply ships. Similar harbors were built at Omaha beach, but were destroyed within several days due to the fierce storms. Here, in Arromanches, as you walk out on the sand, you can see the remains of the harbor barges, both right on the sand, and further out from the shoreline. It was eery to see these remnants of the war, more than 65 years after they were constructed. 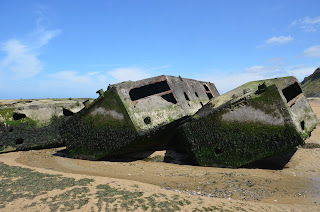 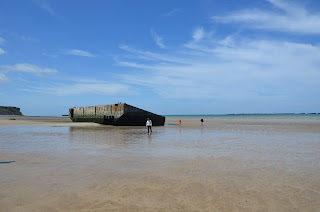 By the end of the day Monday we were saturated with WWII history, but it was a good feeling to know that we had paid our respects to those who fought valiantly to liberate Europe, and save the U.S. from a similar destiny had Hitler not been defeated.

We bid farewell to Freda and Jim Tuesday morning after a nice dinner in Bayeux Monday night celebrating 50 years of friendship as pen-pals. Ironically, with all the hundreds of pictures we had taken in the past three days, none of us took even one picture of the four of us, or even Freda and myself, in all that time!

We found France to be relatively expensive. Museum entrance fees were about 7.50 Euros. Dinner cost about $40-50 per night per person. We chose the fixed price menus, that offered 3 courses and ran around $25-35, plus taxes, which weren't cheap (about 20%). But our meals were great, we ate local Camembert Cheese, fresh French Bread, drank local Calvados brandy (whew! strong!), and snacked on ham/cheese sandwiches and salty caramels made locally. Tolls on the main road (A13) ranged from $5-8 per stretch of road. Fuel (our little car took diesel) ran about $7 per gallon (around $1.45 per litre).

Lest anyone think that our time in France was incident free – on Tuesday we decided to take a short detour to the tiny port of Honfleur on our drive back to Paris to catch our 6:25 p.m. flight to Amsterdam. Arriving at 1:30, thinking we had plenty of time, we parked our car and strolled over to the waterside cafes, ready to have a light quick meal.

The port was charming, and we understood why painters like Boudin and Monet would come there to sit along the little harbor and paint. The explorer Samuel Champlain left from this little port to explore the New World, discovery Lake Champlain in Canada. 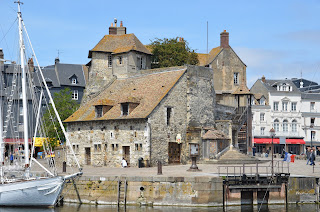 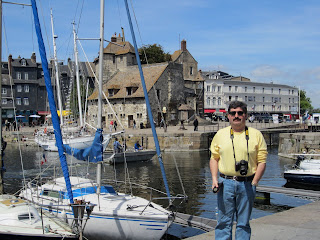 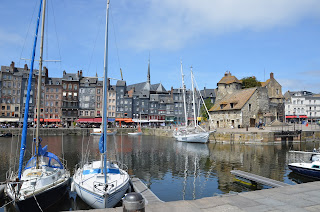 Around 2:45, figuring it would take about 2 hours to get back to Paris, our trusty GPS guided us back to Paris, with little time to spare. Of course, we did not account for the fact that we would arrive in the Paris area right at 5 p.m., in the middle of rush hour traffic! As my heart started pounding for fear we would miss our flight, Brian drove like a true Frenchman, weaving in and out of bumper to bumper traffic like a mad man. I seriously thought that we would not make our flight (and possibly get out of that traffic jam alive), because we had to drop off the car first. We raced into the parking lot at 5:35 p.m., exactly when our GPS told us we would arrive. We had 10 minutes to grab our luggage, race to the terminal across the parking lot, and check our baggage before the flight closed. Of course, the French security personnel did not help one bit, requiring us to remove things from our hand luggage that we never expected. Nevertheless, dripping sweat, we arrived at our gate, somehow, as the flight was boarding, and we got on that plane thankful that we didn’t have to deal with booking (and paying for) a new flight, and wondering if our luggage was going to make it to Amsterdam before our cruise ship left port on Thursday!

We flew out of Paris, grateful that the traffic of the big city was behind us, and a restful two weeks of cruising ahead of us!! Au Revoir, France – until we meet again!