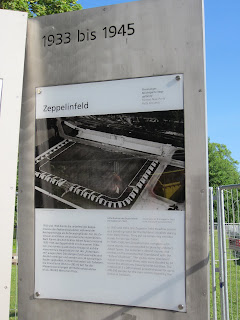 The Parade Grounds in Nuremberg
We docked in Nuremberg early in the morning on Wednesday May 25, 2011. Nuremberg was located in early days along historic trade routes. It was a prosperous medieval city where German emperors held their first imperial assemblies. Ironically, a millennium later, Hitler cynically exploited Nuremburg’s history by holding Nazi party rallies here. However, this also became a major target bombing by Allied forces, and the site of the trials of Nazi war criminals. Today, the historical medieval sites have been restored, and one can see remnants of old Roman walls, one of the arched gateways, and the old market square area seems to be in decent shape.

Brian and I decide to take the optional tour offered by Avalon Cruises that took us to Nazi war sites. It was well worth the money and time spent.

We started our visit to the Zeppelinfeld. As we approached, we saw what are now huge green public parks on our left that were originally the staging area for the thousands of SS troops that organized themselves for the famous annual marches before the Fuhrer – Adolf Hitler. We then drove a few hundred meters to the actual parade grounds. Hitler built this stadium area as a memorial to fallen soldiers and for purposes of showing off his troops in massive parades each year. Today, the Germans use part of it for their racecar competitions, and the remainder is a football stadium. 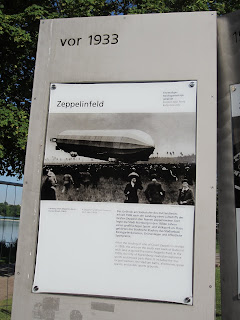 Zeppelenfeld as it was in the early 20th Century 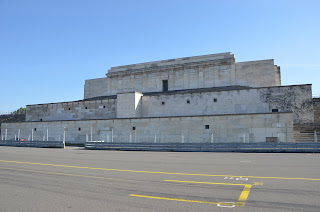 A Swastika once stood at the top center of this structure,
with columns lining the viewing stands to the left and right

Most of the original construction has been destroyed, except for the viewing stand and adjacent seats. A large Nazi swastika once stood at the top of the structure behind the viewing stand, but the Allies destroyed it when they took Nuremberg. The columns behind and above have been removed because they were in danger of falling. We got there early in the morning and were the only group there. How odd it felt to be walking across that large roadway, below where Hitler once stood, looking up to where this maniacal ruler once viewed his thousands of submissive converts. 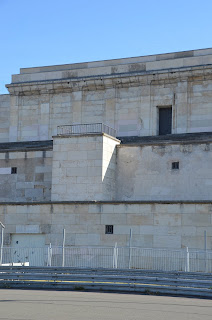 Where Hitler Stood During Annual Parades of SS Soldiers

We then got back on the bus and took a short ride back to the Nazi Documentation Center. This building was originally a coliseum built by Hitler for meetings of the Nazi party leaders. However, because the war escalated in 1936, Hitler never finished construction on this – the workers were instead required to join the army. 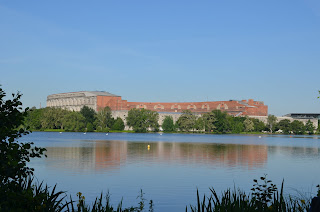 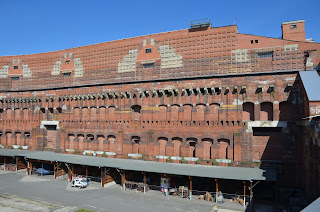 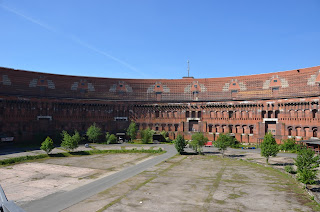 Today, this structure holds a The Documentation Center of the Nazi Party - a wonderful museum of the history of Hitler and his Nazi party. One walks from room to room looking at propaganda (including a copy of Hitler’s Main Kampf). We saw original movies of the soldiers marching, of Hitler speaking to the crowds and patting the heads of children, and pictures of the soldiers and their various “activities.” As we approached the end, we viewed pictures of the concentration camps, the victims, and, finally, a video of the Nuremberg Trials. The chart on the wall of that room also showed the outcome of all of the trials, and the resulting judgments.

The visit to this museum was a highlight of our trip, which has seemed to encompass a lot of the history of World War II.

We then rode around the city, stopped briefly at the courthouse where, in Room 600, the Nuremberg trials took place from 1945 to 1946. We could not go inside because this courthouse and Room 600 are functioning today. 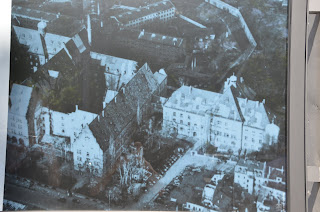 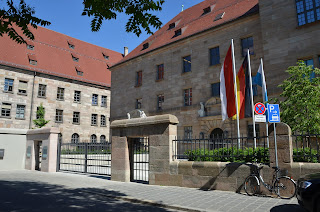 The Courthouse of the Nuremberg Trials as it looks today

Our bus then drove us around the old city walls, and dropped us in the center of the old city, where we had thirty minutes to walk around the market square, and buy some of Nuremberg’s famous “gingerbread.”

Today’s visit was, for me, a little emotional, and a little overwhelming. One realizes the impact a young man born in Austria, who wanted to study art, had on the world as he managed to use his scary narcissistic personality to cause one of the most devastating genocides and wars in world history. Millions of people were killed, both soldiers and civilians, throughout Europe. In partnership with the Japanese, Hitler caused devastation not only in Europe but in Southeast Asia, and on the western shores of the United States.

Hitler is well-known for his saying: “Who remembers the Armenians?” – derived from the time during the First World War when the Germans were allies with the Turks. Hitler masterminded the genocide of millions of people in World War II knowing that the Turks got away with a similar genocide three decades before – fortunately for those victims of WWII, Germany recognized that travesty. The Armenians, Cypriots and Greeks did not enjoy the same result, even to this day.

Sadly, Hitler deprived the Allied countries of the pleasure of bringing him to justice. He committed suicide in 1945 at the end of the war, one day after he married his long-time mistress Eva Braun, who died alongside him.

Cruisin' on Down the Main

Leaving Nuremberg we passed through one of the largest locks of the trip. The lock was 82 feet high. It was a modern lock, in that once we were inside and the gates were closed, three water tanks (massive in size) built along side the lock (one next to the other) filled the lock sequentially one after the other. A large group of fellow passengers came up to the sky deck to watch as we entered We rose to the top of the lock in about 10-12 minutes. As we moved into the lock we saw people up at the top, on the bridge, watching us come in. It is really hard to tell from pictures how massive this lock was and what an amazing fete of engineering it was. Between Amsterdam and Budapest we will eventually pass through 46 locks. 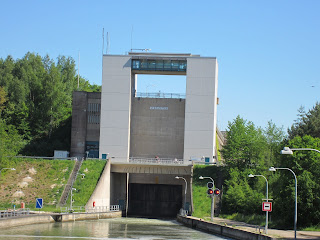 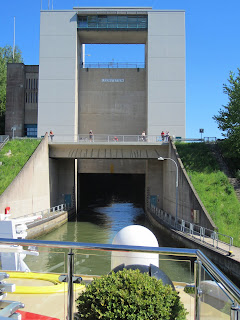 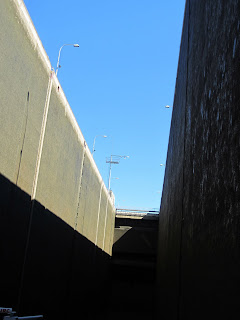 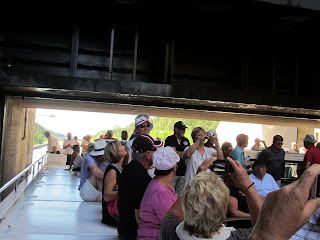 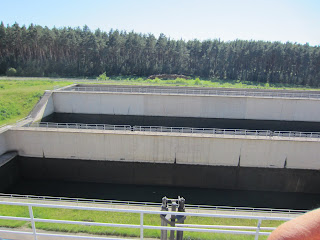 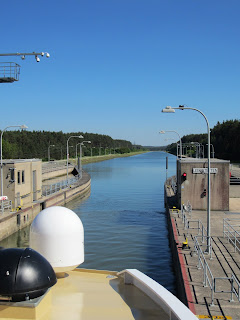 At the top of the water level 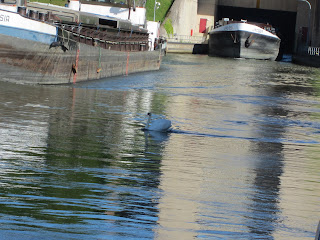 A family of swans cruising along the entrance to the lock 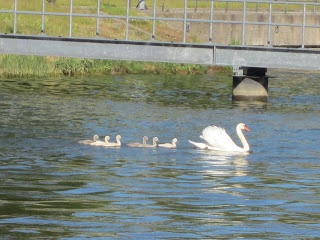 * For more pictures of our journey, click on Brian's Gallery at the top right of the blog.
Posted by Lexizmom at 4:30 AM