CRUISING DOWN THE RHINE RIVER Part 1 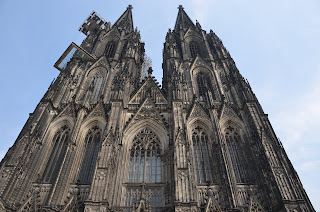 Our first stop, in Cologne, Germany, lasted about ½ a day. Five guides met us at the boat. Each held a color-coded radio receiver that matched the ones we received as we got off the boat. After we put on our personal earphones, our guide turned on his receiver and we were able to hear him clearly as we walked along the Rhine for a short city tour before reaching the magnificent Gothic style Cologne Cathedral, now a UNESCO protected World Heritage Site. Our walk took us by an architectural excavation of a Roman site recently discovered, and the original building where “Eau du Cologne” was created – the 4711 House. 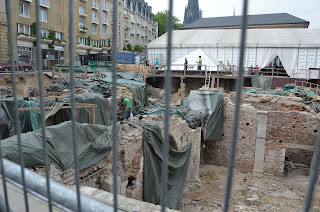 Cologne was heavily bombed during World War II, the train station directly adjacent to the Cathedral being a main target of the Allied Forces. As a result, the Cathedral took some damage. The rest of the city was heavily damaged. We could see bullet holes in the side of the Cathedral. 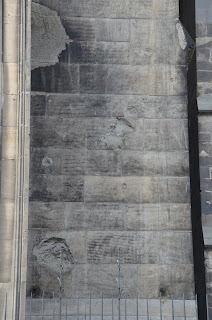 Although some of its roof was damaged, the beautiful centuries old spires survived. The Cathedral is built in soft sandstone and for that reason it has not been cleaned, showing hundreds of years of soot and coal damage. The sandstone is too soft and the end result looks artificial. However, the city is working on reinforcing the spires, which were originally constructed with iron nails, which have rusted. They are being replaced methodically by stainless steel bolts, which should last far longer. 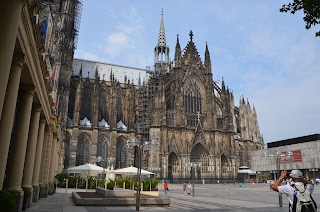 The architecture inside of the Cathedral is like most Gothic cathedrals, with vaulted ceilings, beautiful stained glass windows, side altars and monuments to dead political and religious leaders. However, this Cathedral also has what most believe are the relics of The Three Wise Men (The Three Magii), in a gold “tomb” at the front of the main altar. People make pilgrimages here to pray in front of the relics, which were blocked off on our visit by scaffolding and a heavy iron gate. 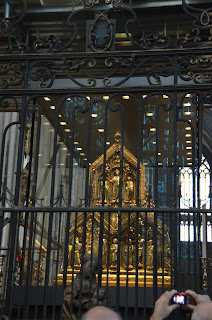 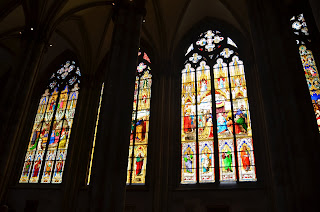 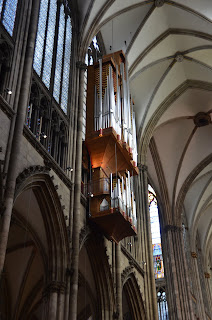 After our visit to the Cathedral, we took a “choo-choo train” to the nearby Lindt chocolate museum, where we opted to pass on the factor tour and just browse the massive shop with hundreds of types of chocolate candies. Of course, we bought some to munch on when we got hungry (not!!) on the cruise. 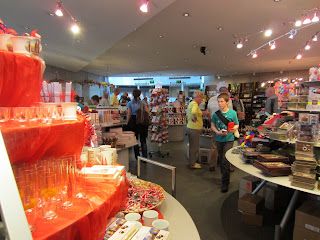 That night we had dinner and sailed on south overnight, waking early on Saturday to enjoy the most beautiful stretch of the Rhine Gorge, with its many castles and vineyards dotting the landscape on both sides of the River. We passed by Dusseldorf (and its huge Bayer factory), Bonn (where Beethoven was born), and Koblenz, the point where the Moselle river flows into the Rhine, called the “German Corner.”

One of the most beautiful parts of the night cruise was passing by Frankfurt. The buildings and bridges of the town are lit up and night. The crew had prepared the ship for the many low bridges to come in the next few days, lowering all of the sun deck coverings, removing chairs, and lowering the captain’s cabin. At one point, we could see the captain’s head sticking out the top of the cabin, as the ship passed under a low bridge, clearing just a few feet above us. 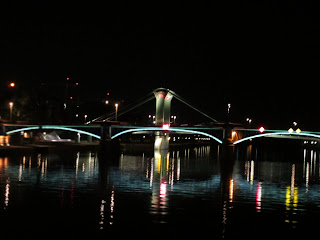 The night lights of Frankfurt 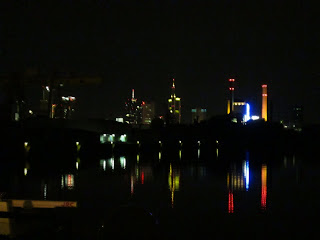 The vineyards along the rivers are planted on the steep slopes of the high hillsides, making harvesting the grape other than by hand impossible. They get plenty of sun that way, but one marvels at how humans manage to get up the slopes to start the harvest, which starts from the top, and works its way down the mountain. These vineyards produce white wines, somewhat mild, but pleasant. 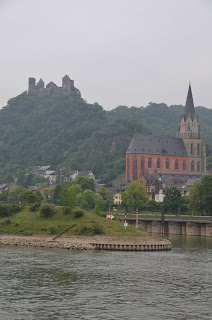 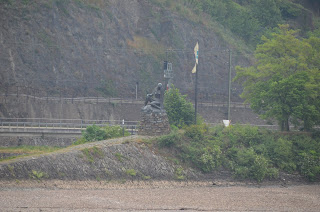 We passed the famous “Lorelei” rock rising 430 feet above the river, where the river narrows down to not much more than 30 feet wide. Because of tricky currents, ships often did not make it around the curved area here. As a result, poets wrote the legend of the Lorelei, which is memorialized by a statue of a beautiful woman at the narrowest point. As we passed by, our cruise ship played the traditional song of Lorelei.

We docked in Rudesheim for the afternoon, where we visited the Museum of Mechanical Musical Instruments. The Museum was originally the home of nobility. Each room contained antique musical instruments such as player pianos equipped with violins, drums, horns, etc., as well as the instruments used by vendors (hand cranked), etc. We were amazed at how creative and talented the inventors of these instruments were back in the 1800’s and 1900’s, and how they managed to create the rolls and discs of music with such precision that you could listen to the sounds of a full blown 30-piece orchestra coming from what looked like a music box, victorola, or piano. 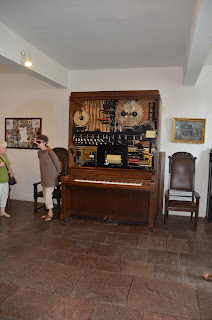 We then strolled down through the tiny streets of the city, had a coffee with the local “Aspach” brandy, and made our way back to the ship. The weather was perfect – sunny, a little breeze, and not too hot. 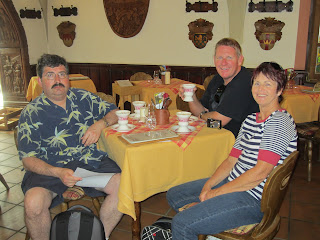 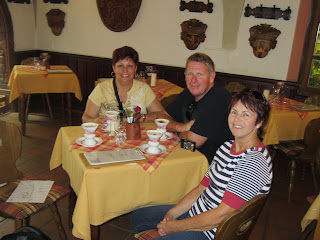 Doug and Deb from Australia

Speaking of weather, except for the dampness of Amsterdam, and chilly wind in France, we have been very lucky. A few drizzles and overcast in the morning during our cruise down the upper and middle Rhine did not detract from what has otherwise been almost perfect weather.