May 14 Bayeux via Giverny, France 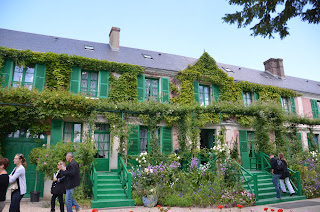 We left from Los Angeles, California and flew business class on Air France to Paris on May 13, 2011. Arriving on time, and having no problem retrieving our luggage, we picked up our rental car and were on the road to Giverny by 12:30 p.m. French time. Our trusty GPS unit, brought from the U.S., guided us through the country back roads between Paris and Giverny, which was a pleasant reprieve from the traffic of Los Angeles.

We arrived in the little town of Giverny around 1:30. This town is where the Impressionist master Claude Monet painted and lived. His home has been maintained by a non-profit foundation for many years.

We visited the home and gardens, which were in full bloom, for about an hour and a half. Our visit included a short walk through a tunnel under the road to the lily ponds that Monet made famous in his many versions of his paintings the Water Lilies. 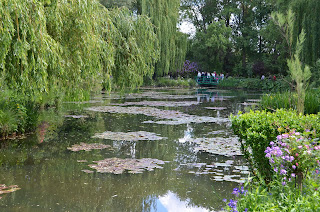 We then continued our journey to Bayeux, in the center of the province of Normandy and a key city in the D-Day Allied Forces invasion of France in June 1944. Fortunately, both of us were able to drive a manual transmission because, operating on only a few hours a sleep, we needed to give each other short nap breaks. But, we made it to Bayeux around 5 p.m. and checked into our hotel, the Churchill Hotel, which was right in the center of the old part of town. The hotel was quaint, the rooms were clean and decent in size, and it was perfectly situated for our visit.

My English pen-pal Freda Millmore and her husband Jim drove up a few minutes later and we enjoyed a nice French meal together before finally heading off to sleep off our long journey.

Bayeux’s history dates back to the first century BC. It was largely destroyed in the late 9th century by the Vikings but was rebuilt in the early 10th century. Its magnificent cathedral, which still stands today, was built in the 11th century by William the Conqueror’s half brother. The city was ravaged a few more times in history until around 1450, when it enjoyed prosperity.

Bayeux is said to be the first city of the Battle of Normandy during the Second World War. It’s buildings remained largely untouched because the German forces were fully occupied defending Caen, approximately 30 miles away, from the Allied forces.

The highlight of our visit to Bayeux, which happened on Tuesday May 17, 2011 before we left for Paris, was the Bayeux Tapestry. This masterpiece, the origins of which are in controversy, was embroidered in wool yarn onto a 1.6 by 224.3 foot sheet of woven linen. In stunning detail, it depicts the Norman conquest of England, led by Harold, recently crowned King of England, and William the Conqueror for the Normans. The museum provided us with a headset that played a detailed recording describing each of the approximately 45 panels of the tapestry.

We also walked through the beautiful cathedral, enjoying the transitions from the early 10th century to the 18th and 19th centuries, as the cathedral was renovated.

** These links will take you to Wikipedia articles that give more detail about the locations.

Check back for photos -- weak internet may delay uploading the photos.