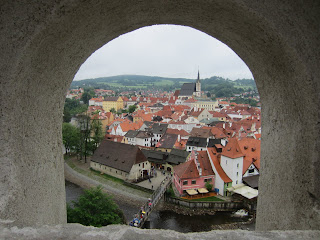 View of Czesky Krumlov from Castle 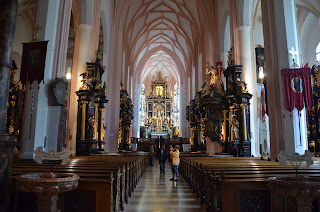 Wedding Church from Sound of Music

Friday morning, May 26, we woke to rain. And, rain, rain, rain. Someone was looking out for us! And (I write this on Saturday) it rained non-stop until about 3:15 p.m. on Saturday! While it was raining in Austria it was dry in Germany. So, those who will take this cruise in the reverse from Budapest, may have a long haul on the bus if the river is still low.

Today we were scheduled to go our separate ways - Brian to Salzburg, Austria, and Adi to Czesky Krumlov (Czech Republic). We left Regensburg on buses, which added about 1 hour to the otherwise 2-hour drive. 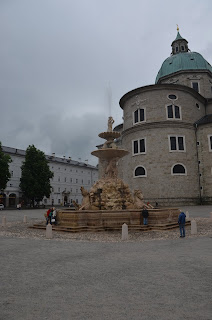 The Sound of Music Fountain 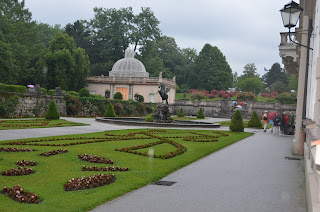 Our site seeing tour took us to the old Roman fortress city of Czesky Krumlov. This well-preserved fortress town in the heart of Bohemia have largely been untouched by history. It too enjoys UNESCO’s World Heritage Site preservation. It has been carefully restored to show the Baroque, Gothic and Renaissance facades of its buildings sitting along many tiny winding streets. The castle, sitting above the streets of the town, was most active between the 14th and 17th centuries. A hike up to the top of the hill to the castle was invigorating (and a real fete for me, as my energy level continues to increase – but OH MY ACHING FEET!!). 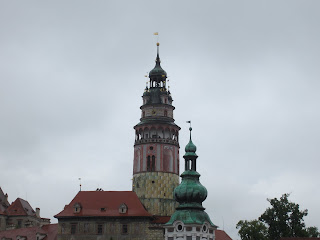 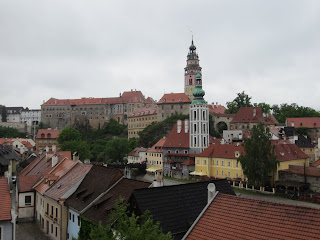 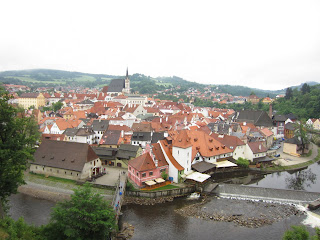 Town from the top of the castle
I enjoyed a traditional Czech lunch of roasted veal and roasted vegetables during our free time. Fortunately, the rain, which had been incessant during our walk through the town, let up for a few hours, giving me a chance to roam the streets without having my head and camera covered. It began raining again as the group met up again, and we walked the 10 minute walk back to the buses.

From there, our guide informed us that our ship had successfully navigated the narrow winding waters between Passau and Regensburg. We began the 2 ½ hour journey back to just north of Passau, where our boat was temporarily docked just long enough to meet the four buses, from Salzburg and Czesky Krumlov. We stopped for 30 minutes in Passau, and a few of us braved the wind and rain to visit the large St. Stephen’s cathedral, which is the home of the largest working pipe organ in Europe.

All the buses arrived at the temporary dock at the same time, in the pouring rain. We went to our rooms, dropped off our back backs and rain gear, and headed back up to the dining room for dinner.