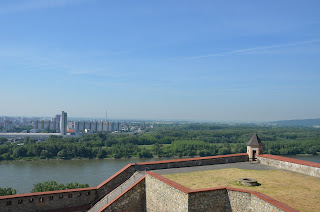 We visited Bratislava on Monday May 30. This town is now the capital of Slovakia - once part of Czechoslovakia. When communism ended, the Czech Republic and Slovakia became separate countries.
We took the usual bus/walking tour, visiting the Fortress overlooking the Danube (and the nearby border with Austria). Walking through town we saw the remnants of WWII bombing, and we observed buildings that were still in a state of disrepair. Apparently, after communism ended in 1989, many of the building owners had to prove their ownership rights to their former homes. In some cases, twenty two years later those families are still trying to sort out their ownership papers. As a result, the buildings have not yet been renovated. Additionally, if an owner could prove that their building was damaged from the war, they would receive their permits to rebuild faster - so, they would take one of the many amassed canon balls, and install it into the outside of their buildings (or so the story goes) to prove war damage! 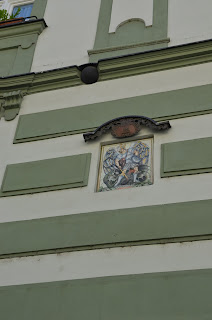 See the Canon Ball above the emblem?
We visited the Cathedral, where both Franz Liszt and Ludwig van Beethoven performed their Mis Solemnas. This cathedral, one in the heart of Bohemia, was the coronation cathedral for Empress Maria Teresa of the Hapsburgs. Notably, one can see the old toilet used for coronation, which was built into a corner of the church upstairs, its opening looking down to the walkway (once the moat). We were told that the coronation lasted more than six hours, and, when you gotta go, you gotta go! 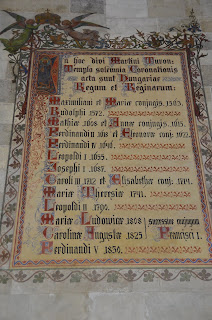 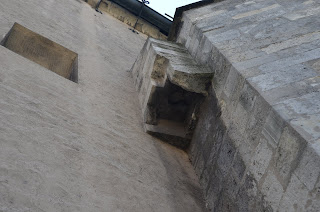 Looking up, but not standing there for too long!
Following our tour of the city, we roamed through the old city and market place, ending up back on our boat for lunch. That evening, our crew entertained us with a "One and Only Crew Show." Next stop, and the last - Budapest (pronounced "Budapesht").
Posted by Lexizmom at 4:11 AM