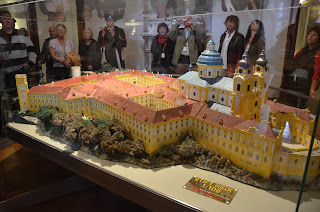 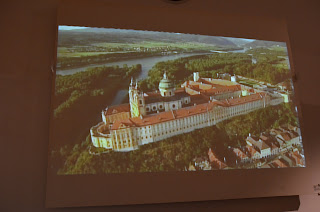 We arrived in the town of Melk on Saturday morning. This Austrian town is best known for its magnificent Benedictine Abbey high on a hill above the Danube. We traveled a short distance in the rain to the abbey where, after walking down yet another long flight of stairs, we had a guided tour through the abbey and a short visit to its cathedral.

The abbey can be seen from the roads below. Inside, it has been restored to its former renaissance splendor. In particular, the rooms once used as residential by the ruling family were now turned into a beautiful museum in which beautiful gold chalices, crosses and other relics are displayed. We walked through some of the 17 rooms of the library building, which holds nearly 100,000 books, many several hundred years old in Latin, and more recent books in German. Look at Brian’s pictures using the link at the top of the blog for some beautiful photos of this wonderful abbey. 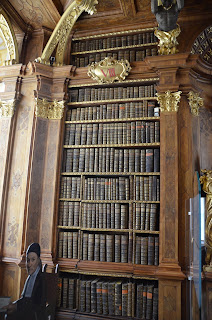 We then walked down the spiral staircase into the cathedral. Because it was a Saturday, we had the great fortune to hear the pipe organ playing as a young couple was being married at the front of the Cathedral. It was ornately decorated in Baroque style. At that moment, we listened to the organ play as the congregation sang a hymn. Finally – I was able to hear an organ play in one of the many cathedrals and churches we visited! 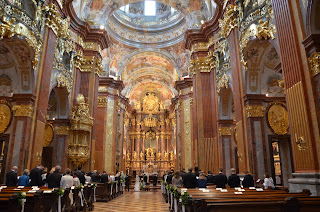 From Melk Abbey we returned to the ship, had lunch, and then stopped for a short visit to Durnstein, a tiny village on the edge of the Danube known for its vineyards and fertile land. The English king, Richard the Lionheart, was imprisoned in the castle (ruins today) sitting above the tiny city. His imprisonment by Leopold V, Duke of Austria, during the Third Crusade in the late 12th century. He was released after a ransom was paid the emperor.

Notable in this city was the tiny graveyard, where villagers would periodically dig up the bones and pile them up in a little covered building on the side of the graveyard in order to make room for the next generation! 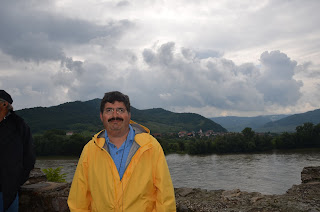 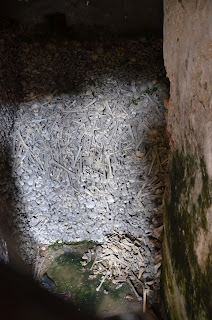 On Sunday May 29, we arrived early in the morning in Vienna. Unfortunately, because it was Sunday, most of the interesting shops were closed. I chose on this day to stay on the ship and relax, having spent a few days in Vienna in 2005. Brian joined the usual morning tour of the City, and roamed around for an hour or so afterwards. One of the highlights of his walk was seeing the famous Lippazaner Spanish Horses in their stables, waiting for the next show, as the resident (pregnant) cat entertained them in the central arena. 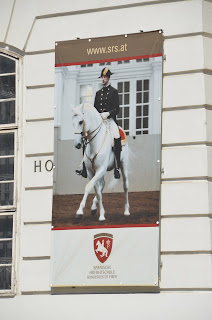 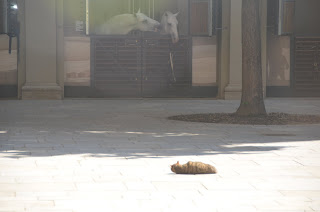 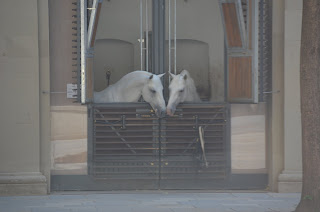