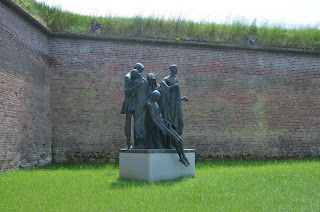 Memorial to Those Who Suffered At Terezin - Inside Small Fortress Moat 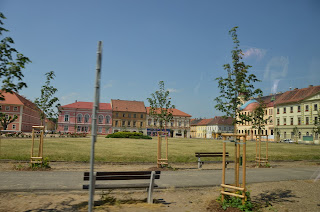 Center of Large Fortress - today 1000 residents
On Sunday, June 5, 2011, we took a bus tour to Terezin, located about 1 hour's drive outside Prague. The Large and Small Fortresses of the small town were built in the late 18th Century by the Hapsburgs, named after the Empress Maria Teresa (i.e. Terezin in Czech). Although never attacked, it was built in response to the Austro-Prussian War.

Historically, the small fortress was used as a prison for political prisoners. In the early 1900's the man who assassinated Franz Ferdinand, archduke of Austria, and his wife, was imprisoned there until he died. Gavrilo Princip, a Bosnian nationalist, was 19 years old when he killed the Archduke. He was imprisoned in tiny window-less cell #1 (which we saw) at Terezin for 3 years, dying of tuberculosis and malnutrition, before he completed his 20 year sentence.

The assassination was the catalyst for the start of World War I. In the 1930's, Hitler and the Nazis evacuated the nearly 5000 residents of the small town, and Terezin became the temporary holding grounds for nearly 150,000 Jews from Eastern Europe -- before they were transported by train to Auschwitz for extermination.

Of the 15,000 children, only 132 are known to have survived. The children of Terezin created artwork during their short time there, drawing pictures of the life they dreamed for, and, for some, the life they were living -- some of those pictures are in the Terezin museum. Others are in the museums of Prague.

Today, Terezin has about 1000 residents in this very quiet town. As we drove through the remnants of the old gate to the Large Fortress, I wondered how on earth anyone could live there, knowing the tragedy that existed there in the 1930's and 1940's, until mid 1945. Near the end of WWII, nearly 33,000 people died at Terezin because of typhoid -- labor forces of the prisoners there were forced to build a crematorium for the purpose of burning off the thousands of bodies, because they could not bury the bodies fast enough. At the time it was liberated, in May 1945, by the Russian Army, only 17,000 people had survived Terezin.

Terezin was used by Hitler as a "model Jewish ghetto" for propaganda purposes. The Jewish prisoners, who lived in the Large Fortress, were forced to "fancy up" the storefronts, and pose as if they were living a model life, and a propaganda movie was filmed for use by Hitler. Unfortunately for that film producer, it went a little overboard, and one who looked at the people in that film carefully could see the dark shadows in their eyes (we were able to see clips of the movie), not healthy people as Hitler would have liked. As a result, the film was never shown, and its creator was sent to his death at Auschwitz. The International Red Cross visited Terezin for four hours in 1944 -- believing that it was a gift from the Nazis to the Jews, and that the life style there was "typical" for war time, the Nazis successfully pulled the wool over the eyes of the Red Cross, which never looked any further than what they were shown.

The Small Fortress was used by the Gestapo as a prison for nearly 90,000 political prisoners, including Allied prisoners and Czech resistance fighters. Close to 2500 of those died there. 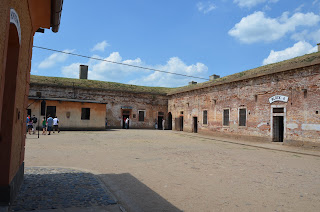 Small Fort Courtyard - Doors lead to small cells
Our visit started at the two-story museum in the large fortress, which had been barracks when first built, and then a dormitory for some of the thousands of children who lived there. We then drove around the little village, and to the cemetery, were we visited the graveyard and crematorium. That area was flooded by the river in 2002, and the crematorium suffered extensive damage. It was rebuilt and today was in fully restored condition. We walked inside the crematorium, were we saw rooms where the Nazi's drained the blood of those who died of typhoid, before they were burned in the large black "incinerators." 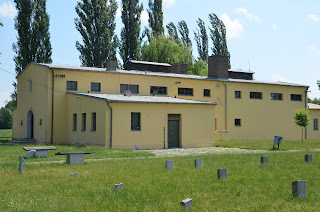 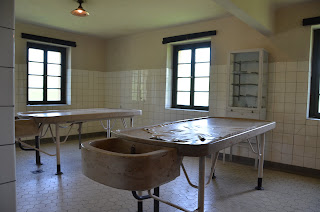 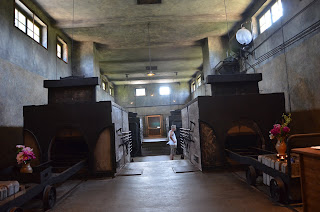 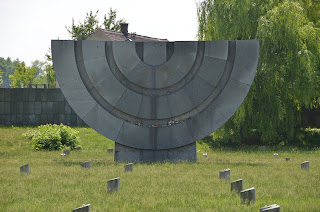 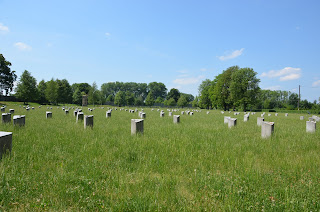 We returned for a short drive through this quiet city, stopping to take pictures. We saw the railroad "station" and tracks that were built by the Jewish prisoners, which lead to the train station nearby -- those tracks took the Jews to their deaths at Auschwitz in Poland. 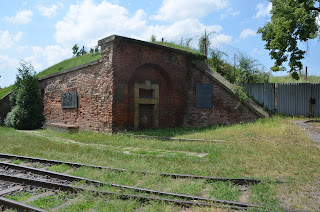 Tracks leading to Auschwitz, built by Czech Jews Imprisoned At Terezin
We then drove to the Small Fortress, where we had a 1 hour guided tour of the various buildings. It was simply impossible to imagine how horrible the conditions must have been there - the cells were tiny, and the Nazis would force 50-60 people to stay in a room designed for six - requiring them to sleep standing up, without fresh air, no windows, and minimal food. The larger "barracks" each housed hundreds of people, although designed for 20-30. 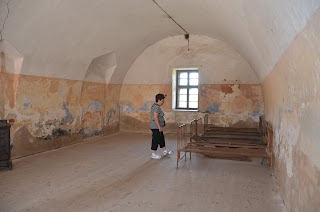 One room, with old rusted cots
We saw the swimming pool built for the Nazi officers and their families, and the officers' barracks - a stark contrast from the horrible conditions in the dark cells used for the prisoners.

We walked inside the historic fortress walls, several hundred feet (kicking up dust that set off Brian's allergies mercilessly!) coming out in the (now dry) moat on the other side of the camp. 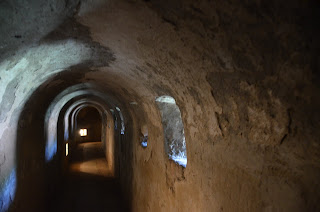 Within the historic fortress walls
In that area, we saw where the Nazi's executed prisoners, bullets taking chunks out of the brick fortress walls built two hundred years earlier. A monument to those who died in WWII was placed close to the entrance back into the fortress. 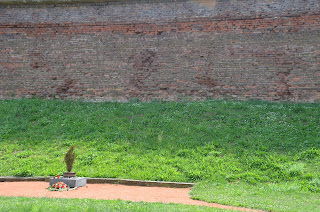 The execution wall
Another smaller cemetery was located just outside of the walls of the small fortress - some graves had names, others just a generic phrase (similar to what we saw at the American Cemetery on Omaha Beach). A tall cross, adjacent to the Christian cemetery, marked one end, and a Jewish Star constructed of the tracks of the railroad built by the Jews, on the other end. 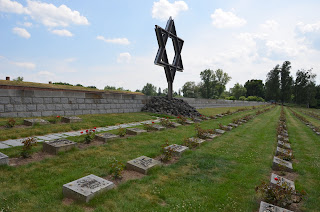 Star constructed of Railroad Ties from the tracks built by Jewish Prisoners
Our visit to Terezin seemed to bring us full circle - we started our vacation at the landing beaches of the Allied Invasion - and we ended it in Bohemia, where the suffering of thousands of people was eventually ended because of the brave and heroic efforts of those who landed on those beaches. In the middle, we visited Nuremberg - the hub of Hitler's sick machine -- and as we ended our trip to Terezin, I was glad that we made the trip there.
Posted by Lexizmom at 6:13 PM