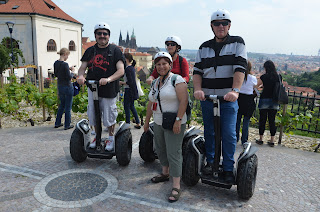 Our Aussie buddies suggested that we go along with them on a 2-hour Segway tour on Friday morning. Brian and I had considered doing that last year when we first planned this vacation - but shortly after the idea popped up, we read that the creator of the Segway had died while on his Segway somewhere in the United Kingdom, going over a cliff. So, that idea went by the wayside.

But, now that we were in Prague, and saw the Segways rolling around, we figured "what the heck." And, we learned that the creator had a heart attack, which caused the accident! So, there we were -- ready to start our Segway tour, in front of the InterContinental Hotel.

First step, get on. Next step, keep it from going all over the place -- i.e. learn how to stop it! Third step, learn how to go forward and backward, and turn. Piece of CAKE!! One by one, we each got on our "animal" and the young tour guide, Andre, gave us a 2 minute training -- and we quickly got the hang of it. FUN, FUN, FUN!! 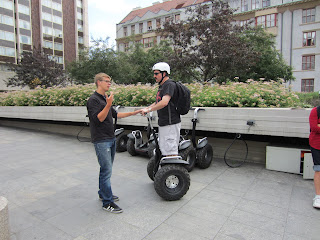 Wearing our helmets, and $100 per person poorer, we headed off over the bridge toward the Castle to begin our two hour tour. Leaning forward, we moved across the bridge, dodging people, riding in the middle of the small cobblestone roads, and weaving our way in and out of the throngs of people heading up the steep hill, ON FOOT, towards the Castle complex where we were the day before.

Segways are a little temperamental on cobblestones, so we had to watch our speed in some areas. But, Brian and I got the hang of it right away and really enjoyed riding along on our little "stead." It was a lot like skiing - leaning front and back, using your feet and lower legs, and rocking from side to side to turn right and left.

We came up to the first courtyard of the Castle, the one we didn't see the day before, and saw crowds of people beginning to wait for the noon changing of the guards. 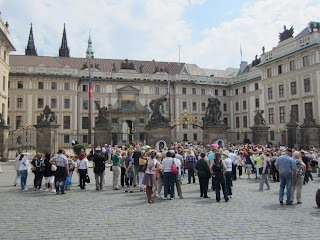 From there we road up further into the town, and stopped to look at smaller churches in the area. We then rode around the Lesser Town, stopping at the Lennon Wall, where artistic graffiti has been painted since the 1980's in honor of protestors and peace lovers. Our guide handed us a Sharpie pen, and Brian wrote a message to cousin Jerry - our family Beatles expert! 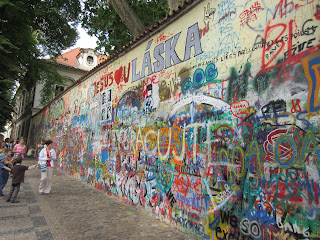 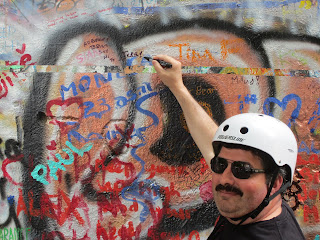 Our tour also took us by a small little square in front of the entrance to the Franz Kafka museum, where we saw the bronze "peeing men" statues created by Czech artist David Czerny. These statues are electronically powered, and the "key" part of their pelvises move, so that they look like they are peeing into a small pond below. Of course, we just had to stop and take pictures, and see the guys made sure to see for themselves how the "moving parts" actually worked! 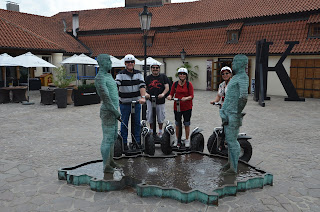 We also passed a small wrought iron fence, looking over the small section of the river canal below, where lovers had placed hundreds of locks, signifying their long-lasting love. We saw something similar on the railroad bridge in Cologne, Germany. 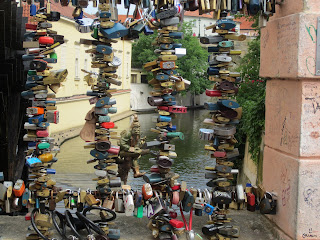 We rode to the top of the park adjacent to the Castle complex, and saw a spectacular view of Prague, stopped for a cold drink, and then began our descent back to the InterContinental Hotel. Getting down those hills, riding over the GRASS, was a little scary, but I was very proud that I had mastered the technique of riding a Segway!

There is NO BETTER WAY to see Prague than to take a Segway tour! Definitely a MUST, and something I will do again if the opportunity presents itself on my future travels! 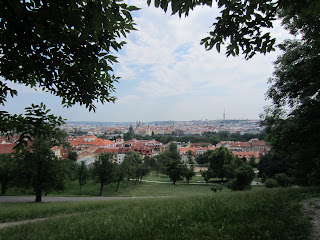 Friday afternoon Brian, Deb and Doug walked around Wenceslas Square and did some shopping, while I returned to the apartment to relax.

On Saturday, Brian walked up to the old Fortress above our apartment, visited the burial places of Anton Dvorak and Smetna, and took pictures of the spectacular view. I stayed back at the apartment and relaxed, along with organizing luggage for our return to the U.S. 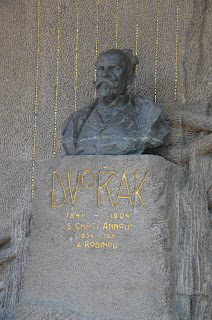