Ah Prague - It is all they said it would be! Part 1

On Wednesday June 1 we left the Panorama at 6 a.m. (ugh!!) and headed to one of two Budapest airports for our short flight to Prague. We were lucky to have Priority Passes through Amex to spend our waiting time in the exclusive lounge - such bourgeois! We boarded our 40 seat prop plan (oh yes, it was TINY) for the 1 hour flight and were fortunately in the back row of economy (with bus class at the back of the plane where we boarded) so we didn't have to listen to those loud engines for an hour! Arriving in Prague at 10:25, we met our driver and drove the thirty minutes into town, passing countryside and then lovely "villa" style residences on the new side of town.

We stayed at the Arcadia Residence apartments - the owner owns two buildings, one directly in the Old Market Square area, and another just below the old fortress in Vrashad - about 15 minutes from the center of town. 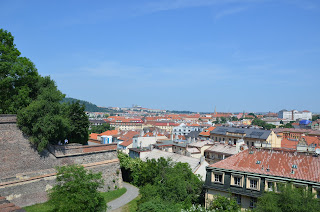 A view of our apartment area from the old fortress - we are just to the right of the road
We stayed at the latter. I cannot say enough positive things about Arcadia Residence, which is rated #1 on TripAdvisor.com for Prague Hotels. We were met by Max, who spent nearly an hour with us giving us an orientation to the neighborhood, the city, the tram system, and even walking with us to the tram stop to make sure we were on the "right track." Our two-bedroom attic apartment was spacious and each of us looked forward to 5 nights of quiet sleep without having to endure the snoring of the other as we had for the past 3 weeks! We had a kitchen, a living room with a view, and a full size bathroom with a tub and separate shower. Our apartment had a view of the City of Prague, including the Castle - which couldn't be beat. A mini-market was 2-3 minutes walk from us, and a wonderful local restaurant just a few doors away. And, the price was unbeatable - 110 Euros a night, tax and breakfast served at the time of our choosing included! Max's hospitality and personal attention through our entire stay is something one would never find at any hotel, 5 star or otherwise. I would stay there again without hesitation.

We spent our first afternoon walking for about 3 or 4 hours through much of the main part of the City. Our first stop, Wenceslas Square, is located in the "New Town." This long street is historic in Prague history. Once a horse market, it is now lined by dozens of shops and restaurants, including McDonalds and Starbucks, preying on tourists. On this square in 1989, thousands of people gathered to hear of the fall of Communism. At one end, just in front of the National Museum and not far from the train station, is a statue of St. Wenceslas, the patron saint of Czechoslovakia -- he brought Christianity to the country in the 10th Century. The Xmas song "Good King Wenceslas" is about this king. 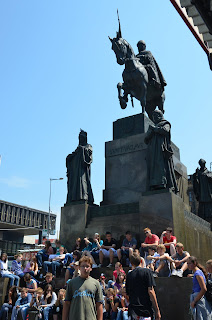 We walked to the top of the square, and then partway back down, were we stopped at one of the touristy restaurants for lunch - a TRADITIONAL Czech meal - pasta! Of course, we were ripped off, since this area is just inundated with tourists. But, we were hungry, and decided to ignore what we knew was an overpriced lunch.

We then walked down to the other end of the square, which is about 1 mile long, found the Apple Store so Brian could buy an adapter to hook up to the internet at the apartment, and eventually made our way to the Old Market Square -- the location of the famous Astronomical Clock Tower, built in the 1400's. It is the third oldest working clock tower in the world. 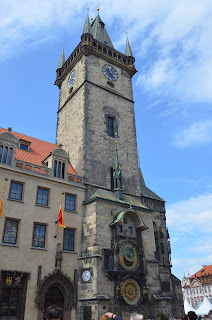 Coincidentally, we walked into the square at about 2:59 p.m. - to see a CROWD of hundreds of people waiting for the clock tower to "perform." Sure enough, seconds later, the tower bells began chiming, the clock windows opened, the little figurines began moving, and then from the top of the tower we heard a man dressed as a soldier playing the trumpet - people cheered and it was all very entertaining! Brian's picture album has a video of the clock tower - follow the link to his album at the top of this blog, and then go to the bottom of his photo album.

As we walked around the square dodging the throngs of people, we saw beautiful old buildings, people selling their wares, including roast pig, and I realized why people love this city. It is alive, a mix of the old and new and lots of fun! 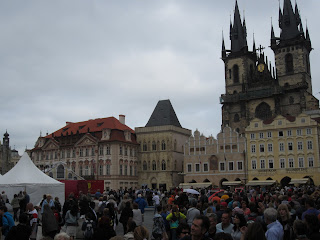 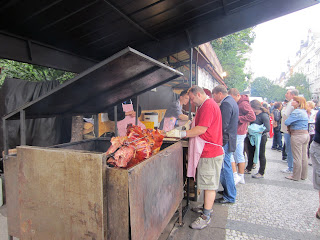 We passed lot of churches that advertised concerts in the afternoon and evening, as well as many souvenir shops, with wood carvings, glass jewelry and glass artware. From the Old Market Square, we continued walking ending up about 2 bridges above the Charles Bridge. Realizing we had gone too far (heck, my feet could have told us that without a map!), we walked along the river back towards the famous bridge. We had been warned by Max that the Charles Bridge would be very crowded, but by the time we got there around 4 p.m. it wasn't too bad (relatively speaking). 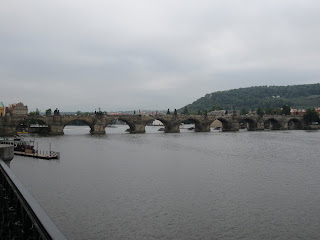 Construction of the Charles Bridge dates back to 1357 under King Charles IV. It was finished in the 1500's. It's purpose was for the King to travel through the old town, over the Moldau River and up to his Castle complex. Its construction resulted in Prague becoming a significant trade route during that time. It has suffered some damage from floods and recently underwent some reconstruction, which is controversial because of the lack of authenticity of the manner of reconstruction. One enters the bridge from the Old Town through a tower opening. 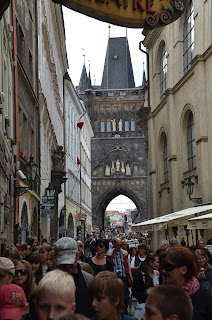 The Gothic style bridge, constructed of 16 arches, is approximately 30 feet wide and 1500 feet long. It is lined with 30 statues and monuments which today are replicas of the originals placed there in the 1700's. During the evening, the bridge is quiet - but during the day, it is PACKED with people, and lined with artists, musicians, and people selling jewelry and trinkets. THIS is the place to be! 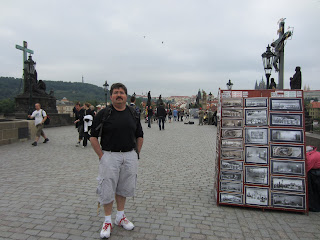 One of the statutes lining the bridge on either side represents St. John of Nepmuk, now a saint saint of Czech Republic. St. John was believed to have heard the confessions of King Wenceslas' queen, but refused to divulge those secrets at the King's demand. As a result, the King had him drowned in the river off the side of the bridge. As he touched the water, 5 angels arose, as the legend goes, and St. John became known as the protector of the city from floods and defender of the seal of confession. Today, people stop by this statue on the bridge, and rub it believing that good luck will follow -- the darkened patina of the statute was rubbed to a shiny gold color from all the people touching it. We later saw the tomb of St. John in St. Vitus cathedral within the Castle complex, which I will tell about in the next blog. 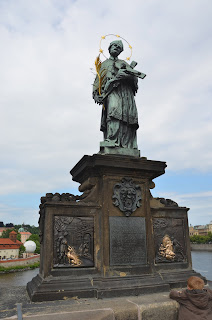 We ended today's journey by walking to a tram stop and traveling along the river back to our apartment. After picking up bread and cheese from the mini-market, we settled in for the evening, enjoying some relief from not eating dinner, and getting back to some normalcy after all the food on the ship!