On Monday June 20, 2012, we arrived in Diyarbekir – the historic Armenian capital of Dikranagert.  In 2009, we came into the old city from the south via the Mardin Gate.  This time, we came from the north via the Harput Gate.

The history of the city dates back to the 13th Century BC where it was the capital of the Aramean kingdom and part of a historic Assyrian/Syriac stronghold that produced many famous patriarchs of the Syrian/Assyrian church.  Some of their patriarchs are buried in St. Mary Assyrian Church, which we visited during our time there.  (More later on that church).  This area was known for the great city built by the Armenian King Tigran - one of four cities throughout historic Armenia named Tikranagert.   The time of King Tigran reign was also known as the Golden Age of Armenia.  Historians believe that the original site for historic Tigranagert in this area is within 20 miles of the current-day Diyarbekir.  Its remains have not yet been confirmed.  Recently, however, archaeologists discovered the remains of another one of the four cities in Karabagh (the area to the East of current Armenia that is now the subject of a long and unpleasant conflict between Azerbajian and Armenia).  That site is now under excavation and restoration. 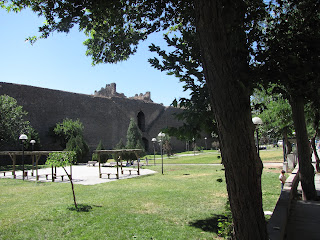 The old city is surrounded by ancient fortress walls that we were told are close to the length (in totality) of the Great Wall in China.  Whether or not that is true, looking at the walls of the old fortress was still a real treat.  In the area of the Harput Gate, one section has been removed to construct the road.  The rest, while in disrepair, is still intact. 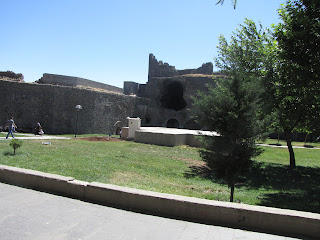 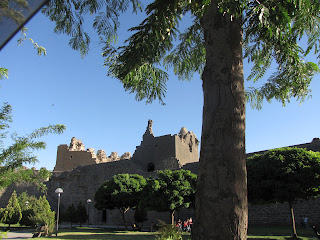 We parked the van next to the wall and began our afternoon walk of the old city.   The old city is configured in a circle with two larger roads intersecting the city to create four quadrants.

In the early 1900’s when my family lived here, we believe they lived in the area marking the lower left quadrant, near the Mardin Gate and Sourp Sarkis Armenian Apostolic Church.  The Cathedral of Sourp Giragos Armenian Apostolic Church was located in the lower left section of the upper right quadrant.  We believe that our family attended both churches.  We know from my maternal grandfather’s writings that his family attended, and was part of the construction of, St. Sarkis church.

Walking up the main street running up the center of the "circle" of the old city, we saw vendors selling cheese, vegetables and herbs, bread, and all kinds of day-to-day goods, including huge bins of diapers, imported (probably from China) skirts, underwear, t-shirts, kitchen utensils, etc.  Ice cream carts and bottled water vendors lined the streets.

We turned onto much narrower cobblestone streets that passed through the residential areas of the city leading to Sourp Giragos.  Our mission was to see the cathedral, which was recently completely renovated and consecrated.  My family (brother and cousins) visited this city in 2009 but we did not see Sourp Giragos church, which at that time was still in ruins.  As a result, we were not sure whether the family picture taken in 1913 was taken in front of the windows of Sourp Giragos or Sourp Sarkis (the church we visited). 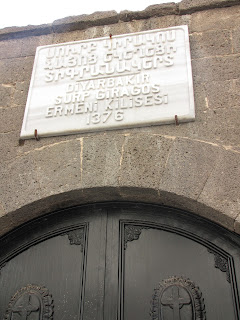 We reached the outer walls of the cathedral complex, only to find the gate locked.  Our guide knocked, and a workman answered the door – when we asked if we could come in, he said no – “renovation.”  Not an acceptable excuse for me!!  I told him (whether he understood or not) “We came from the United States to see this church – you have to let us in!”  Our guide chipped in using his broken Turkish – eventually, not being able to beat down my persistence, the young man let us come in.  I later showed him the family photo, which was on my iPhone, and then he understood why we wanted to see the church.

Walking around the outside of the church, we realized that our family photo could not have been taken at this church.  The windows were architecturally different and placed too high. 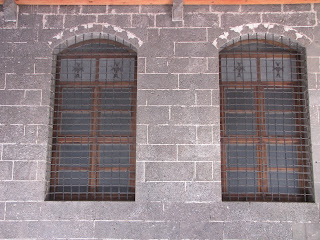 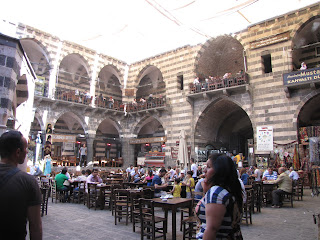 We next walked to the nearby “caravansary” which was used in the old days for the various merchants to show their wares, and to sleep on their journeys to different villages.  My great grandfather was a merchant and most likely this is one of the places he may have sold his wares.  The other caravansary in the old city is very near Sourp Sarkis Church and the Mardin Gate.  It is now a luxury hotel. 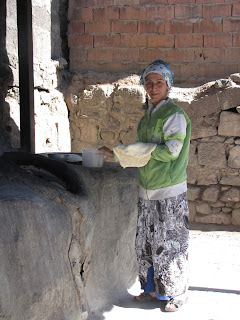 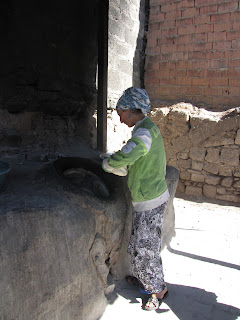 Leaving the caravansary, we walked to the southwest quadrant of the old city, through narrow cobblestone streets, passing children playing in front of their doors, women standing in their doorways, and, occasionally, a young woman standing at the local “tonir” baking bread.  The tonir is a deep vessel built into a cement “table” – the woman builds a fire inside at the bottom which gets the vessel very hot.  She then removes the wood, makes her bread loafs, and then slaps them onto the sides of the hot tonir.  The loaves stick to the sides and bake – with a crispy bottom (the best part) and soft middle.  My grandmother Queeny told us about how as children they went with their mother to the tonir and helped her bake bread.  Because the two tonirs we saw were very near Sourp Sarkis Church, and looked like they had been there for a long time, I envisioned that my grandmother and her mother Lucia (who was killed by the Turks in the village) may have likely stood in this same square.

Our next stop was the historic Syriac Church, Saint Mariam.  Father Joseph’s son invited us in.  Father Joseph was sitting in the beautiful courtyard outside of the church but within the walls.  He took us on the tour of this beautiful renovated historic church. 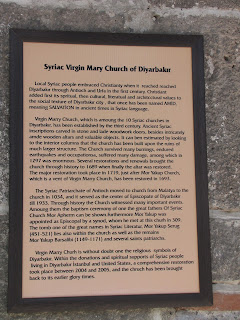 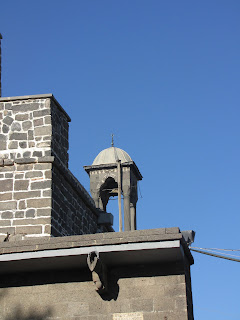 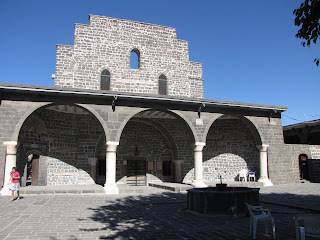 We all then walked the winding narrow cobblestone pathways several hundred meters to Sourp Sarkis Church, which our family visited in 2009.

The gate was locked, but a villager who lives in a “dwelling” that has been constructed almost inside the wall area of the church allowed us to walk through her home into the courtyard, where her children were playing, and where a small herb garden was growing in the dirt along the outer wall of the church.  I don’t recall seeing this home in 2009.

Father Joseph had never been inside St. Sarkis and was amazed at how terrible its condition was.  He explained that the locals knew this church as the “rice church” because they used the church in past days to package rice.  It was in no better or worse condition that what we saw in 2009.  However, as we explored the church again – this time somewhat less emotionally than the last time – we found some interesting inscriptions that I personally don’t recall seeing in 2009.  Our guide, Dikran, was very excited because he too had never been in this church. 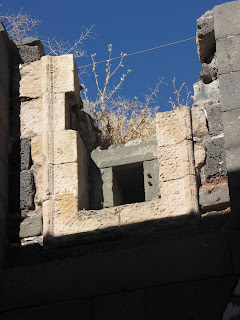 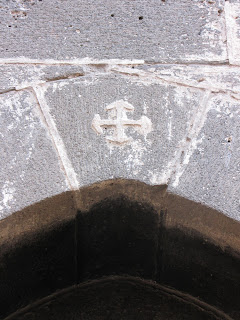 We then explored the outside of the church, and all of us were convinced that our family sat in front of these windows in 1913 as part of my great great grandfather’s funeral and took the family picture that led us to this city.  It was a very emotional moment for me.

Across from the church yard I was able to look through bars covering the windows of a residence that has been abandoned because of disrepair.  My grandmother described her residence as a "courtyard surrounded by doors" leading into the various dwellings which were occupied by her aunts, uncles and cousins.  The picture below depicts the inside of the home across from the church.


We returned to the Syriac church, had coffee with Father Joseph and then went to our hotel located just outside of the Harput Gate, about 5 minutes walking distance from the old city.  That evening we had dinner at a charming little outdoor restaurant and visited with its manager, who was a Kurdish friend of our guide.  He shared with us the difficulties the current day Kurds are having with the Turkish government.  This city is the center of the political strength of the Kurdish rebels who are experiencing oppression from the Turks to leave the area – most of Western Armenia is now inhabited by Kurds.  Back in my grandparents’ time, the Kurds were not friendly to Armenians.  Today, they are sympathetic to their historic plight.  Hearing this young man tell his story I felt like “déjà vu” back to the early 1900’s.

The following morning, we left our hotel and began our journey back to Armenia, heading to Erzurum for the night, and then for the Armenian populated area of Javakh in the country of Georgia.  I felt like this chapter of my quest to stand where my grandparents had stood nearly 100 years ago was finally complete.  It was a very satisfying and emotional day for me.
Posted by Lexizmom at 12:04 PM