I was honored and delighted to accompany a group of twenty-four Mer Hooys pilgrims from the United States during most of their two-week visit to Armenia.  What an amazing and fun group of people, most of whom were personal friends and the rest of whom became friends.

Our group included Chris and Margaret Yaldezian, their seven grandchildren - Alli, Maggie, Micah, Matthew, Jacob, Shant and Nicholas; advisory board member Harriet Phillips and her granddaughter Christine (plus three shared grandchildren with Chris/Margaret); my two goddaughters Rachel and Danielle; Mer Hooys advisory board member Debbie Derderian; sisters Kathleen Paul and Margarite Mansoorian; Rose Hovsepian; cousins Aida Abboud and Juliette Borokian from the East Coast; siblings John and Elizabeth Plavdjian; Jeff and Karen Hazarian and Karen’s cousin from Texas Shirley Conrad.  When we weren’t attending Mer Hooys meetings, spiritual leader and Mer Hooys Board member Father Avedis Abovyan of the Western Diocese, and advisory board members Lisa Kalustian and Lynn Nakashian accompanied the group on many of the tours.  Board member Dn. Barlow Der Mugrdechian often joined us during the last week of the pilgrimage and at the Mer Hooys opening.  SIMA Tours and dear friend Shake Derderian organized the tour. 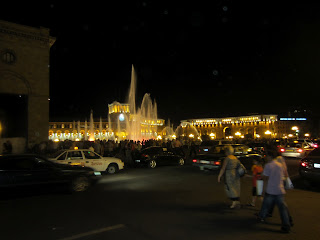 Our young adult members of the pilgrimage were all experiencing Armenia for the first time.  They figured out in no time how to take full advantage of the cosmopolitan environment of night-time Yerevan!  The karaoke bars will never be the same!

During the day, they joined the group helping the “older folks” up steep steps, walking up rocky paths and slopes, and with just generally making their way at a slower pace.   Sitting in the back of the big tour bus, they sang, told stories, and laughed making the trip such a joyous time for everyone else.  They often braved the climb up narrow stairs, while the rest of us looked on. 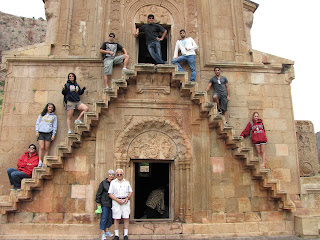 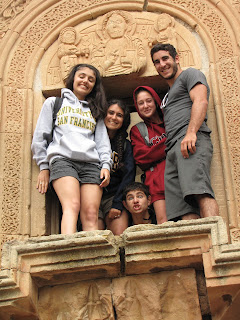 Our “older crowd” contributed to the fun as well.  Buddies Karen H. and Margaret Y. left us holding our stomachs in mirth as they shared non-stop laughter prompted by often-secret subjects.  It didn’t matter what they laughed at – it made all of us laugh too!
We enjoyed evenings out to dinner at restaurants in Yerevan, when we weren’t too full from “lunch” (often at 3-4 p.m.!).  The BEST laugh on our dinner nights out was the night we went for MANTI at the place around the corner from the Congress Hotel. The conversation went something like this:  Us: “We came here for manti – we want manti (on the menu).”  Waiter:  “Sorry, no manti, you can have dolma.”  Us:  “No, we want manti.”  Waiter:  “Sorry, manti is for another group with reservation.”  Us:  “OK, we are leaving.”  Waiter:  “OK, manti is yours – they can have dolma.”  Other group – never showed!  Manti – amazing!!

When we needed a bus driver, Margaret jumped in without hesitation!  (NOT!!).  We cautioned her as she sat in the seat of the driver, with the bus parked heading toward a DEEP ravine – DON’T TOUCH THE GEAR SHIFT!!!  She was also our official "Armenian coffee cup reader" - we are certain that our buddy Jeff H. is headed toward the priesthood according to Margaret's "tea leaves"!

When we visited Khorvirab, most of the group (except those of us who did not like heights) went into the pit that was St. Gregory’s prison.  Mercifully, the Armenians have now figured out that the trek down into the pit is MUCH safer with a solid accessible ladder safely secured to the walls of the chute leading down to the bottom, with a railing leading to the ladder – that did not convince me to make the trip down as I did in 1971, but others braved their fear of heights – INCLUDING the incredible Chris and Margaret!  Shame on the rest of us cowards!! 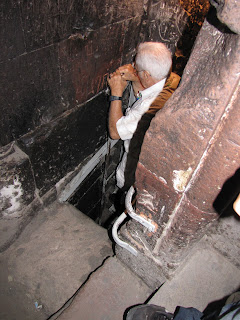 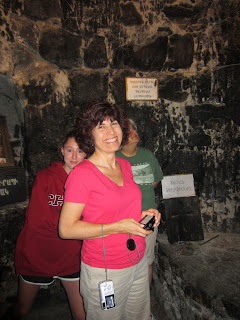 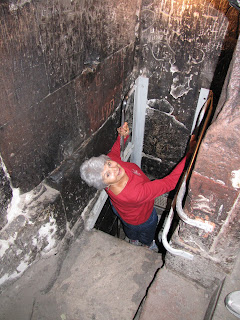 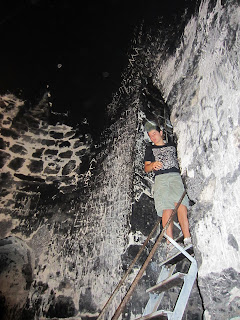 On Sunday, June 24, 2012, we attended Badarak (Divine Liturgy) at Holy Etchmiadzin, at which His Holiness Karekin II, Catholicos of All Armenians, presided.

On Monday June 25, 2012, we combined a visit to the churches of St. Hripseme and St. Gayane in Etchmiadzin with an audience with His Holiness Karekin II, Supreme Patriarch of All Armenians.  Father Avedis, Mer Hooys Director Mihran Mirijanyan, Bishop Moushegh Babayan – liaison to Mer Hooys from the Mother Church, Ruth Bedevian and Lynn Nakashian joined us for the forty-five minute visit. 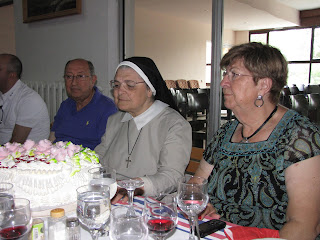 On June 26, 2012, while the group went on a day tour, Lisa K. and I had the pleasure of spending the better part of the day at a summer camp for orphan children in Tzaghadzor.  The camp is operated under the direction of Sister Arousiag Sajonian of the Our Lady of Armenia Center in Gyumri.  This amazing woman, known throughout Armenia as the Armenian Mother Theresa, has given hope to hundreds of poor children from disadvantaged lifestyles, both through her privately funded summer camp and through the Center in Gyumri which provides a home and education to orphans.  Sister Arousiag’s home is the only other program of which I am aware that is reaching out to help, among other children, young girls to achieve a productive adult life and avoid human trafficking.  I was honored to have the opportunity to spend some time with her, to receive her wise advice, and to share the joy of the children she so selflessly serves.  We joined Papken and Anahid Megerian, their children and grandchildren, in celebrating their 50th anniversary with the children at the camp, were entertained for one hour in their auditorium, and then enjoyed watching the children participate in a variety of outdoor competitive exercises.  Those were culminated by several minutes of group dancing - with music blasted over the loudspeaker - where everyone, including the group of guests from the U.S. joined in with joy.  It was an amazing day! 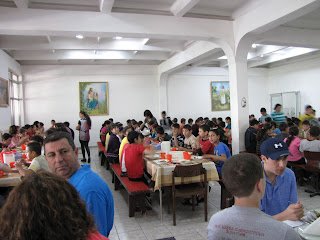 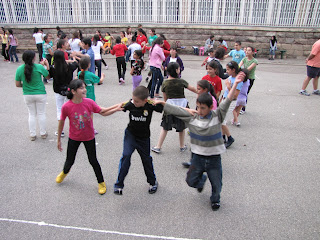 Day journeys for our pilgrims included a trip to Vanadzor and the Lori region of Armenia, Noravank Monastery,with a stop at the Areni Winery, lunch and a COLD swim (for those who were brave!) at Lake Sevan, Dilijan and the monasteries of Haghgardzin and Goshavank, a visit to Ashtarak with lunch in a home near the church where St. Mesrop Mashtotz is buried, a visit to Saghmosavank Monastery and the adjacent gorge.  We visited the Temple of Garni and attended Divine Liturgy on Sunday July 1 at the beautiful monastery of Keghart, listening to the choir of “angels.”

We hiked up stairs to the top of the island at Sevan, climbed trees, posed in front of hundred year old walnut trees, listened to the doudoug player at the steps of the Sevan island, observed a "Madagh" (killing of a lamb) at Kehgart after church services, bought delicious gatah from the ladies at Keghart, and generally soaked in the Armenian history and nature on our journeys. 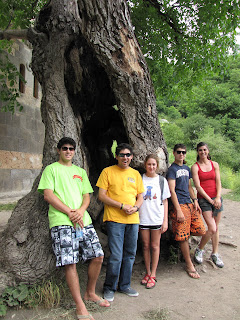 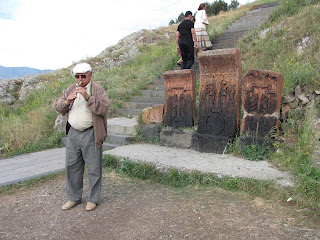 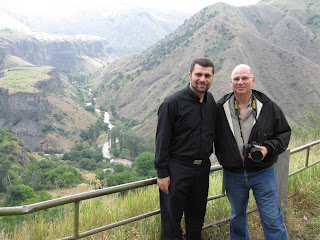 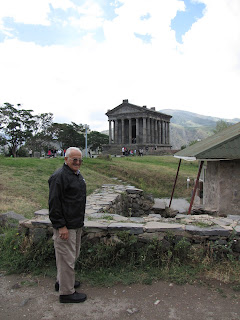 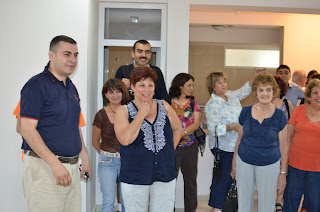 On June 28, 2012, our entire group, accompanied by other “friends” of Mer Hooys, spent several hours at Mer Hooys.  After a tour of the facility, we moved into the dining hall, where twenty teenage girls selected as likely candidates for the first class waited to meet us – for me, this was without a doubt the most emotional and gratifying moment of the entire two weeks in Armenia!  To see those beautiful faces filled with joy and hope, and some trepidation, was a fulfillment of a long-time dream for me  – one that was ending one phase and beginning another!  Stay tuned for Part 3!