June 2012 - The Journey Back to Historic Armenia Begins

We began our journey on June 13, 2012 flying out of LAX on Air France’s A380 jumbo jet.  What an experience – more than 500 passengers on a two level plane – it seemed like the plane would never lift off the ground!  But, the inside was very quiet and very comfortable, particularly in Business and Premium Economy classes. 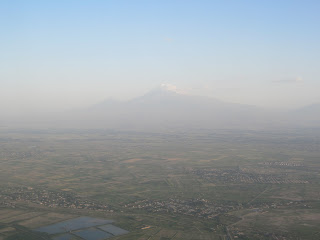 We landed in Paris and connected to our flight to Yerevan, arriving at 7:30 p.m. on June 14.  From the right side of the plane, I was able to see two peaks of Mount Ararat (OUR mountain) as we approached the runway.  I always find seeing the mountain so emotional as we fly south from around the backside through Turkey and then cross over the border into Armenia where Ararat sits majestically looking back over what was once her home before 1918.  The evening sky was a little hazy, but I did take a few pictures anyway.

After passing through visas, immigration and customs, and successfully resisting Customs officers' attempts to charge us duty on the new clothes we were bringing in for our Mer Hooys girls, we met our driver and went into Yerevan for a short night’s sleep before beginning our drive to Turkey.

We were up and out of Yerevan by 7 a.m. the next morning, meeting our guide/driver Dicko Khatchaturyan.  Dicko is a highly educated young man in his thirties who is a wealth of knowledge.  We drove about 3 hours to the Armenia/Georgia border, passing through the Armenian city of Gyumri.  Gyumri suffered significant damage in the 1988 Armenia earthquake, remnants of which can still be seen throughout the city.  We then headed north through very rural areas, passing small villages surrounded by fields of beautiful purple, yellow and brilliant red wildflowers.  This area is sparsely populated, with pockets of little dwellings scattered over the rolling hillsides.  The weather is chillier here than in Yerevan, and the houses show that wear and tear.

Reaching the border, we first passed through the Armenian checkpoint, learning that our 21-day visa purchased upon our arrival the night before was only a single entry visa – even though we asked for a multiple entry visa – the result of 20 hours of traveling and not checking before we left that window! 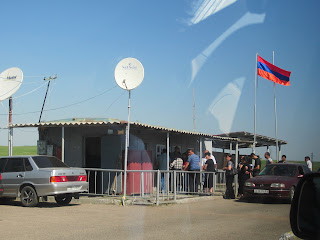 Next came the Georgia checkpoint – another 15-20 minute stop.  The roads up to this point were not bad- mostly narrow two-lane Armenian highways with very few cars.  We drove through the town of Akhaltalag in the Javakh region of southwest Georgia.  We will return here at the end of this part of our journey.  Armenians heavily populate this area.  We stopped in another village around 1 p.m. and had a lunch of fresh baked bread, salami, bananas and yogurt in the local park.

Our next stop, the Turkish border.  We reached the Turkish border around 1:45 – just missing the Turkish border agents’ lunch hour – God forbid!  Had that happened, we would have had to sit there for an hour waiting for them to finish their lunch.  Not surprisingly, the minute we crossed over onto the Turkish side, the roads within the border area were completely unpaved.  We had to buy a visa, prove to one of the agents that we were not coming in with any contraband (booze, weapons) and eventually (half an hour later) we got our visas.  Leaving the border checkpoint, we saw a line of nearly one dozen large trucks parked and waiting on the side of the road to pass through the checkpoint into Georgia.  Surely at least of few of them ended up spending the night – the border checkpoint closes around 6 p.m.!  These trucks bring goods between Iran and Turkey, using Armenia and Georgia as the intermediary route.

Our journey on June 15 ended around 4 p.m. as we entered the historic Armenian capital of Kars.  This was our second short visit to the city.  We stayed at the brand new Ani Hotel, which was modern and had all the necessary comforts.  We ate dinner at a local restaurant and had a meal of tender grilled chicken, grilled beef, lahmajoon (Armenian pizza), with unbelievable fresh backed bread and yogurt drink.

Kars served as the capital of Greater Armenia in the ninth century.  The capital transferred to the city of Ani, some 35 kilometers southeast of Kars, under the Bagratide Dynasty of Armenian kings.  The Ottoman and Seljuk Turks eventually conquered Ani in the 10th and 11th centuries, and Ani and its hundreds of churches and buildings were largely destroyed by an earthquake in the 12th century.  Years of complete neglect by the Turks, weather and earthquakes covered much of the old Ani.  Ani - which is an archaeological and historic treasure -- was rediscovered in 1905 and 1906 by a European archeologist.  Unfortunately, the current Turkish government has ignored the value of this amazing historic site, largely because of its Armenian history. Today, it sits on the border of Armenia and Turkey. [I wrote extensively about Ani in my 2009 blog during our visit there.]

The Armenians in Kars during the early 1900’s were either killed or escaped to Eastern Armenia (now the country of Armenia) during the 1915 Genocide of Armenians by the Turks (they call it “a civil war” with great loss of Turkish lives).  In 1921, after Russia gained control of the area, the Kars Treaty gave the land that included Kars and Ani and Mount Ararat to Turkey.  Kars is now inhabited mostly by Kurds – who now are in conflict with the Turks.  Virtually all evidence that Armenians ever lived in this city - except for a few scattered architectural designs - has been obliterated by the Turks.

During our short overnite stay, we walked up to the old Armenian church of Sourp Arakelotz (Church of the Holy Apostles), now a non-functioning mosque.  We saw this church in 2009 and I have posted pictures on my blog from that visit.  (See links to Kars on the right side of this blog).

Of course, the sign in front gives credit to the Bagratid Dynasty of Armenia for its construction, but no where does one see any mention that the BD was an Armenian Dynasty.  We then hiked up to the historic remnants of the Kars fortress, from which we could see the entire city and, to our left, the area where historic Ani exists today. 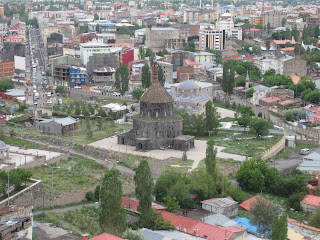 We left Kars on Saturday morning and drove to the city of Erzurum where we spent the night before heading out early the next day for the first of three of the family historic villages we came here to see.
Posted by Lexizmom at 12:06 PM