"WHERE ARE YOU FROM?"

People from the town of Diyarbekir often call themselves "Dickranagertzis" -- meaning, from the village of Dickranagert. We learned that Diyarbekir is more probably not the location of the historic Dickranagert. Armenian history tells us that King Tigran the Great built four cities called "Dickranagert" naming them after himself. One of those cities was located in the territory east of Armenia now called Karabagh - and the ruins of that city were recently discovered by archaeologists. The second, and most likely the largest, was built in an area about 30 kilometers from the current city of Diyarbekir. The ruins of that city were also identified within the last few years. The second city was most likely the one famous for being a cultural center filled with scholars, poets, writers and other intellectuals during the time of King Tigran the Great. The last two city locations have not yet been located.


We are asked almost daily, and sometimes several times a day -- "Where are you from?" Most often, we answer "America". Occasionally, when we become tired of being asked, and because we are so angry at what has happened to the once-flourishing Armenian communities in Western Armenia, we answer "Dickranagert" - our ancestral home.

In the morning of June 8, 2009, we left the city of Mardin and drove along a new highway that ran alongside 40 kilometers of hills, valleys and wheat fields. This terrain was the site of the death march of those coming from Diyarbekir, and surrounding villages. Once we passed the mountainous area, we traveled through miles of open fields, with no trees in sight. Those hills undoubtedly bore the suffering and death of the hundreds of Armenian women and children who were deported from their homes north of there. The area was hot, and dry, and spotted with occasional small villages of old, poorly constructed masonry shacks with straw roofs, the occasional newer home, and the town Mosque.

The area north and east of Sanliurfa - now called Eastern Anatolya - is largely inhabited by Kurds, who were given the land from there to the border with Armenia on the East as part of a treaty at the end of World War I. Few Armenians can be found until you make your way north to Van and Mush, and then only a few proudly acknowledge their Armenian heritage.

Approaching Diyarbekir from Mardin, we began to see the old city in the distance, surrounded by the massive city walls built around the 9th and 10th century AD. The Armenians lived in the old city, which was surrounded by the walls. We entered the old city through the Mardin Gate, and drove around to the side of the city that was bordered by the Tigres River, far below the walls. There, our driver stopped and spoke to an older Kurdish man, who joined us and guided us to the spot where we would begin our walk to Sourp Giragos Church -- where Zorah, Queeny, Rose, Karnig, Nishan, and Diran were baptized, and where Lucia Memleketian and Aslan Amirian married.

The old city is made up of narrow, winding pathways too large for anything but the smallest car. As we turned corner after corner we became silent, knowing that somewhere along these narrow paths our ancestors walked, shopped, visited, played, and died.

Then, we turned the last corner and standing before us was the remnants of what was once a magnificent Armenian Church, our family church - Sourp Giragos. [2012 NOTE:  we later learned that this church was Sourp Sarkis Armenian Church.  I have written about this church more extensively both at the end of this trip's blog, and also later during our 2012 visit.)


This picture was taken in 1910, after the death of great-great grandfather Giragos, who is sitting in the middle of this picture, appearing to be asleep. 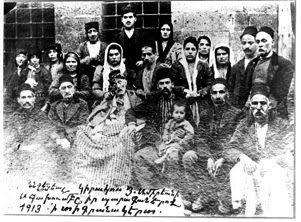 As we approached, we saw a wrought iron gate surrounding one side of the church, with a small grass area inside, and a playground built in the area behind what was once the altar of the church. The church was bordered by a pathway from which many closed doors would then open into courtyards around which several small homes were situated -- the courtyard was shared by the families who lived in the those homes. The Amirians lived in a "compound" (my grandmother's word) like those, and somewhere not far from the Church, and not far from the pathway at the old wall that led down to the Tigris River.

We were joined by another Kurdish man as we approached the gate to the courtyard, and he led us into the churchyard for our visit.

What we saw horrified us. Inside the entrance gate, we found a paved courtyard leading to the entrance of the church. The church had no roof and the entrance was in shambles. A group of young boys were playing there -- and as we entered the courtyard they ran to us, shouting and yelling "where are you from?"

One by one we each climbed through the low entrance into the Church, facing history. The ground was completely dug up, the famous arches crumbling, the ground littered with animal and human defecation, the once beautiful altar completely gone. This picture shows the beautiful arches as they now exist. 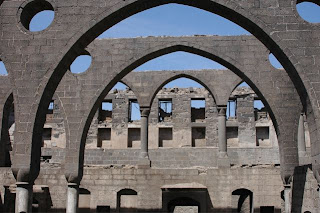 The next picture is the altar as we saw it. You can see the decoration above the arch of the altar - the only thing left of what was once a beautiful marble altar. 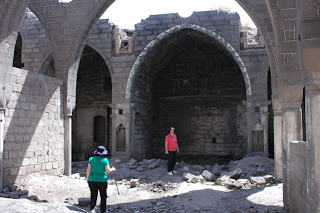 No roof exists on this once large sanctuary. The windows have been blocked with stones, and nothing but rubble remains. The children were hanging on us, laughing and shouting. A couple of the kids managed to somehow climb up to the top of the church, and laughed as they threw pebbles down on us.

We had planned to play Gomidas Hayr Mer and Sourp from Gomidas Divine Liturgy, but that became impossible with the bedlam we faced. In tears, I made my best efforts to record what I saw with the video camera, losing my temper with the children. This was a church -- and it had been defiled by the Kurds and Turks who assumed their places in the homes and neighborhoods of our ancestors.

Fortunately, the children somehow realized that something unusual was happening, and they quieted down, as we began to light candles at what was once the side altar. After lighting candles, we lit incense. Then, we began to pray - saying Hayr Mer (The Lord's Prayer). 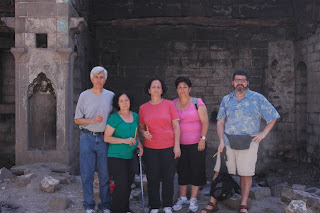 Brian and I climbed over the rocks, dirt, and piles of fresh human droppings, and walked out the side door. We learned from our guide that after the Genocide, Kurds and Turks returned to Armenian villages and dug up churches and homes looking for gold -- that had clearly happened here.

Leaving the courtyard and returning to the walkway, we found the windows where we believed that our family may have taken its picture in 1910, and we gathered to do the same, in honor of our ancestors. The photo below is in front of what we think are the windows the 1910 photo was taken. The window on the right is in shadow, behind Lisa. 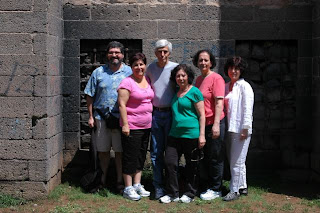 This day was one of the most emotional days I have ever experienced. I know the same is true for Brian, Debbie and Susan, as well. I could not stop crying -- because I knew that our family had walked in this church, along the small narrow streets and alleys of this area, had prayed, and married, and had been baptized in this city. I knew that along these streets they had suffered, and died. I knew that if any one of them had seen an Armenian Church where they may have worshiped in this condition, their hearts would have been broken.

Nearly 25 years ago, Father Sarkis Petoyan (then "Diran") visited Turkey, including Diyabekir. On his return, he came over to my house for dinner. Grandma Queeny and Aunty Rose were still alive, and we brought them over so they could see the pictures of their former home. My Grandma said "Why do you go there? It is a terrible place. I don't care if I ever see it again." But, when Diran (Father Sarkis) showed the picture of Sourp Giragos Church as it looked before the Genocide, both Grandma and Aunty Rose immediately reacted -- "That's our church!" they exclaimed. "We know that church!." They began to talk about their childhood days in Diyarbekir.

Years later my grandmother told me not to ever go to Diyarbekir -- it was a waste of time, she told me. I am glad I went, and I am glad that I was able to see where the Amirian family enjoyed a prosperous and happy life, for at least a few years. And, I am glad I was able to pay my respects to my great grandfather and great grandmother, and their brothers and sisters, and parents.

As I first entered the small arched entryway to the church, the children were grabbing me because I had the movie camera. I did not see the low arch, and banged my head quite badly, reacting by yelling at the children to get out of my way. I had a good bump on my head for a day or two. When I told this to Brian, his response was "That was Grandma asking you why you came here!" About 20 minutes later, as Brian and I walked around what may have been the graveyard -- Brian was treated to the same fate as I when I walked in front of the Four Seasons Hotel in Istanbul -- bird droppings all over his arm. As he exclaimed that he had been "hit" -- I responded "That also was Grandma, telling you to leave this place now!"

In reality, I don't think that my grandmother, or any of her siblings, would have really been upset that we were visiting the church where they spent their young childhood. I think they would have been proud of us -- they were looking over us that day, knowing that their long life of making sure that their family stayed together had been successful. I think they would have been proud that we made the effort to come here, and pay our respects to the heritage they left to us to continue.