After a nice visit to the Lake Van region, we began the long journey to Kars in northeastern Turkey. Our trip to Kars, and from there to the City of Ani, was filled with excitement and humor, which helped break up the very long drive and bumpy roads.

Our journey took us through beautiful mountainous countryside as we left the Lake Van area. After driving for a couple of hours, and making a few stops to enjoy the scenery -- including the remnants of a few churches high on the hills -- Vartan turned onto a dirt road and parked in a small dirt lot. We got out of the van, and there before us we saw a narrow, wood, high suspension bridge that crossed over the gorge from which the Bekli Waterfalls flowed into the river below. Crossing that bridge was one of the scariest things I have done in a long time -- no thanks to Vartan who decided to shake the bridge from side to side as I fearfully made my way across the death trap! Thanks to Lisa, enjoy a few pictures of the experience. 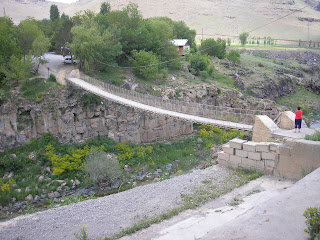 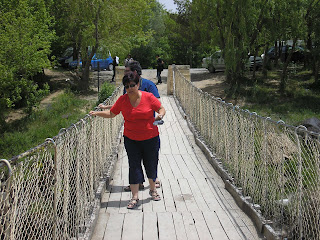 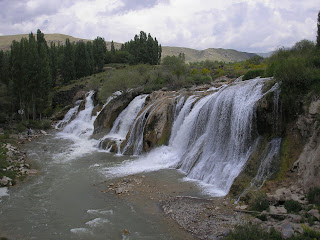 Our drive continued through miles of lava fields as we passed by Tondrouk volcano. I have never seen so much lava -- spreading miles in all directions, creating craggy rocks and small peaks. 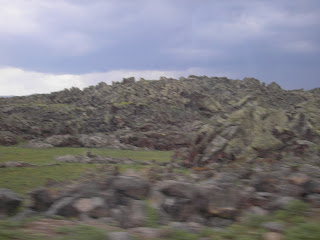 By shortly after noon, Vartan began playing Armenian music, and as we came over the last peak of the mountainous area and began to head down into the next valley, there looming before us in all its splendor and beauty was MOUNT ARARAT! The weather was clouding with rain imminent but our mountain was not a distant figure, but within reach -- the top of Medz Massis (Big Mountain) was almost fully visible except for a few clouds at its peak. Pokyr Massis (Little Mountain) peaked out from the clouds to the right of the large mountain. 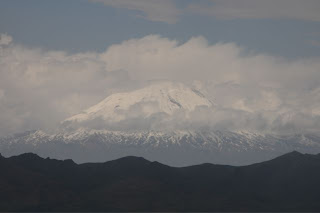 We drove down the mountain to the town of Dogubayazit, the home to Daroynk Fortress, settled by early Armenians. Of course, not to leave a fortress untouched, we drove to the top and walked through the old fortress, which is now under renovation. This fortress now resembles the inside of the Topkapi Palace of Istanbul with its Harem quarters -- those ladies were lucky, however, because their windows overlooked Mount Ararat.

After lunch in town -- we ate Keshkag, a barley/meat stew and drank Ayran (yogurt drink) -- we continued our journey to Kars. For several minutes we came as close as anyone could to Mount Ararat - - within 1 1/2 miles of its base. God looked over us, because the clouds cleared, and we could see the mountain in such detail that I felt like we could touch it. We learned that from this point hikers trekk to the top of Mount Ararat and plant the flags of their countries. 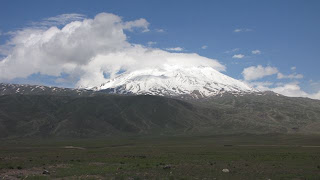 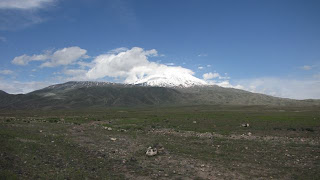 "HYE ENK!" WE ARE ARMENIAN!


We continued our journey to Kars, late in the afternoon, driving through more towns and fields, including the town of Igdir. The highlight of this drive was our proximity to the Armenian border with Turkey. As we made our way winding through the roads, Vartan stopped at one point, high above the Akhouryan River. Akhouryan River is the borderline between Turkey and Armenia.

As we sat in the van looking at Armenia, fearful to take pictures at the border, Vartan began shouting "Hye en! Hye enk!" at the top of his voice -- aiming his words at the small border patrol station across the gorge, and at the tower where Armenian soldiers were posted. We waited for the sound of gunfire to zing by us! But, Vartan had no fear -- shouting again "Hye En" but this time waving the small Armenian flag he had been displaying on the windshield of his van through our trip. He insisted that we get out of the van, take pictures and wave to the Armenians on the other side.

Soon, children began running to the edge of the plateau, and a few of them started running down paths to the river to get closer to us. Then, we saw the guard in the tower began to wave to us, and we waved back -- Vartan turned on his music player in the van, loudly displaying lively Armenian music. And, gradually we all started waving and clapping (well, almost all of us), and laughing at the fact that we were Armenians in Turkey waving and shouting to the guards in Armenia - proudly announcing that we were Armenians. And, waiting with bated breath for the Jandarma (Turkey military police) to come speeding around the next bend with their machine guns aimed at us! But, that did not happen. 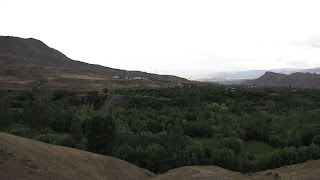 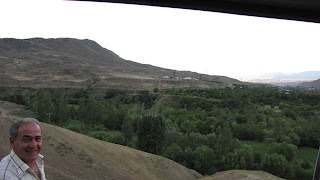 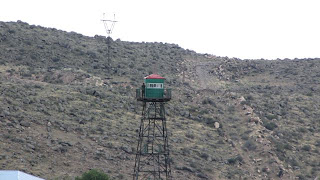 We continued our journey to Kars, passing through a rainstorm that created a magnificent rainbow behind us -- both ends were visible -- and the rainbow arched over the gorge of the river, over Armenia, as if to say -- "Welcome, Armenians!"

It was a perfect ending to a perfect, but very long, day. Tomorrow - Ani, the City of 1001 Churches. 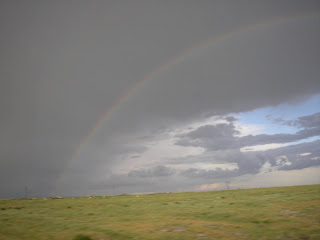 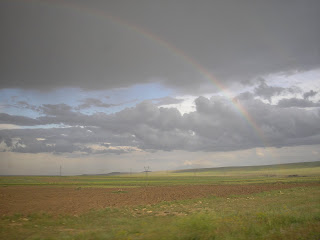